It has been an entertaining week.

On March 1st, I had the great pleasure of entertaining Captain Harry Thuillier (brother of the late Capt. George Thuillier) on his return after four years’ service in Mesopotamia and the East, together with his contemporaries at the OPS who happened to be in Oxford and able to attend a dinner at the Clarendon. 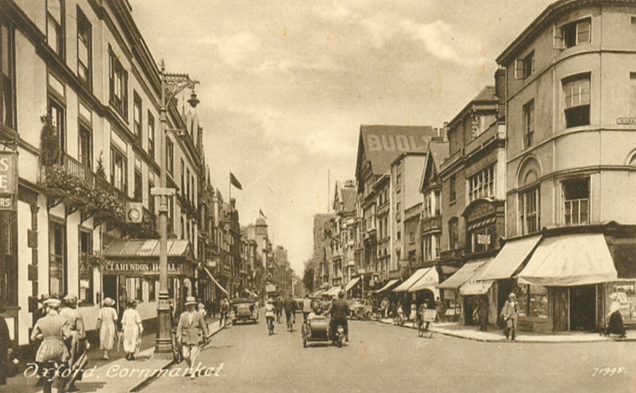 The Clarendon Hotel on Cornmarket Street.

Many old incidents of school life were recounted, and many yarns of the War.

This was followed, on March 4th, by a trip to Cambridge to meet up with Old Dragons there. I am grateful for an (anonymous) account of the evening from one of our kind hosts:

“We had a very pleasant dinner on March 4th, and were delighted to see the Skipper, Hum, G.C., and Lindsay Wallace. Their sporting effort was much appreciated, because their Ford broke its heart – or big-end, or something – between the two universities, being so disgusted at being driven from one to the other, and they had to leave it in the ditch, and commandeer a more neutral one. However they arrived, and we are told that they were in nine o’clock school next morning. Well done!

AC Kermode was in the chair, with the Skipper next to him. The Navy surrounded L Wallace and made him drink Bubbly. GC was encompassed by correspondents, and we thought we saw one of the present Headmasters sitting next to a Bolshevik.

The Chairman proposed the health of the School, and expressed the very great pleasure all the ODs at Cambridge felt at seeing the four representatives of the School amongst them.

The Skipper replied, thanking ODs for inviting them, and saying how much they liked visiting Cambridge. Having seen the beauty of King’s College Chapel by moonlight, he would not call it a rival, but rather a sister university.

The Rev RGD Laffan, unfortunately, had to go off early to see one of his theological students boxing in the Varsity contest, which had stupidly been arranged for the same evening.  Also Maurice the sailor (who last boxed to the detriment of his handsome countenance and general feeling of steadiness on, or off, the Norwegian coast), went to witness the administration of black eyes.”