Yesterday’s edition of ‘The Times’ reported the death, on April 19th, of Harold Leefe Robinson.

Harold, together with his brother William, was only briefly at the OPS, in 1901-2,  after which he returned to India with his mother. He did return to England to complete his education at St Bees School in Cumberland, but he then went back to India and took charge of a tea estate in the Coimbatore district in 1913.

On the outbreak of war he joined up and entered the Indian Army Reserve. He was attached to the Mahratta Light Infantry and had been serving in Mesopotamia since December. He died of wounds received during the attempts to relieve our troops stationed in Kut.

(His brother William Leefe Robinson, who is now in the RFC, has been wounded, having received a shrapnel wound in the leg when flying over Lille on May 9th last year.)

Today’s ‘Daily Telegraph’ contains news (on page 9) of an attack on the GPO in Dublin, which gives us great concern for one Old Dragon family living there: the Norways.

We await news as to both his safety and that of the family. Nevil Norway, now aged 17, will have returned home recently for the holidays from Shrewsbury, where he is now at school.

For those of you still struggling with your ‘Liddell and Scott’ to interpret the inscription on Roger Mott’s “Balkan find” (see previous post), ‘The Balkan News’ comes to your rescue:

“We present our readers with a translation, as we fear that the original text might be Greek to some, not to say all, of them.

‘The city (erected this tablet in honour of) Manius Salarius Sabinus, the head of the gymnasium and benefactor, who very often in times of dearth sold (corn) far below the market price, and when the armies of the Lord Caesar passed through, supplied to their stores 400 bushels of wheat, 100 bushels of barley, 60 bushels of beans and 100 firkins of wine at far less than the market price, and contributed 370 francs towards the repair of the gymnasium, and at the festivals gave gratuities to the tables of the councillors and ex-mayors and to those citizens who shared the banquet, and in all other respects frequently proved of service to the city. Pereisi as son of Phila, who is also called Biesias, and Herod, son of Beithys, supervised (the memorial) in the year 269.’

Some contractor, this Sabinus! We don’t fancy we have come across any of his descendants in Macedonia today. If there are any, we should like to meet them…

The inscription seems to belong to 123 A.D., and the Caesar referred to  would in that case be Hadrian, that much travelled statesman-emperor who paid a visit to Britain and organised a strong defence line to rescue northern England from the depredations of the savage Scot.”

An interesting discovery by Roger Mott and the Royal Scots Fusiliers. Hopefully the tablet will find a safe home and that we will all be able to inspect and enjoy it one day, when the war is over.

Major Roger Mott has written from “somewhere in Macedonia,” where he has indulged in some archaeological digging alongside his military duties.

“At ******** we have for some time been digging trenches and, being situated in a country of such classical associations, you may imagine that quite a number of interesting ‘finds’ have come to light – for instance, a tour of the trenches would reveal several old stone coffins, which make excellent ammunition or grenade stores; whilst for the storage of water you would, here and there, come across an amphora.

But the particular ‘find’ I refer to is a memorial tablet in white marble, in practically perfect condition and believed to date from the first or second century.

So I bethought me to have a copy made and sent to you. Maybe it will interest the modern Dragon, for I think ingenuity and a ‘Liddell & Scott’** will be able to unravel the hidden meaning thereof.

Alas, the early instruction in those class-rooms in Crick Road has been allowed to rust within my brain, so that my attempts to decipher the thing have not been altogether a success.

I got it reproduced somehow in small Greek characters, then tried to split it up into separate words, then searched a modern Graeco-French dictionary and finally a French-English one, with the result that I gather the city was extremely grateful to the gentlemen who bust up a ring of evil merchants. But you never taught me the last letter of the last line but one, which is annoying!” 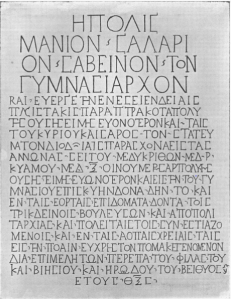 I am sure readers would like to have the opportunity to exercise of their brains over this Easter holiday to work this out. To help, Hugh Sidgwick has transliterated thus: 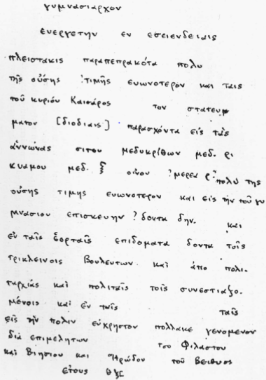 ** This capital text book has a close link with the OPS.  Dragons will know the rhyme:

Whereas Mr Scott (and his rot) has no connection with us, the riddle-some Dean Liddell (of Christ Church) is one of our founders.

(I am tempted, by the way, to add an extra line: “And little or none of it learnt by Mott!”)

We have another book written by an Old Boy to review for the Draconian:

The O.T.C and the Great War – Capt. Alan Haig-Brown

This book is a history of the Volunteer movement at the Universities and Public Schools under the title of the Officers’ Training Corps. The Corps was once described as the “spoilt child of the War Office.” Since August 1914, however, it has supplied over 20,500 officers to the army.

Alan was at the OPS as a boy from 1888-90. He won a scholarship to Charterhouse, where his father was headmaster, and thereafter he became the first of our old boys to attend Cambridge University (Pembroke College).

Alan became a schoolmaster and in 1906 took command of the Lancing School Corps. In that role he attended a meeting at the War Office, where Sir Edward Ward, with Lord Haldane in attendance, presented his suggestions for change. Rather than the University and School Corps be attached to the local Volunteer Battalions, they would now become the senior and junior divisions respectively, of a new Officers’ Training Corps under the direct control of the War Office.

“The whole matter had been carefully thought out; the actual details were waiting for us – there was really nothing to discuss,” Alan opines in this book. “But where many schoolmasters are present, lack of discussion is improbable, and if there are headmasters amongst them, as in the case, impossible.”

The structure was easily agreed, particularly as it addressed the question of how to attract volunteers to join the Corps. Up to recent times, the prospect of ever needing to repel an invasion seemed a very remote possibility. Alan amusingly notes that “as for examinations, so for war, it is a British custom to prepare overnight or early next morning.”

An Officers’ Training Corps was much easier to promote, “that there really was a need for officers, and that every member was to be trained to fit himself as a leader of men and as an important and desired servant of the Empire.”

At Lancing, one way or another, Alan Haig-Brown persuaded every boy to volunteer for the OTC, making them, it is said, the only school with 100% participation.

Clearly, without these important changes, which were made in 1908, we would not have been able to combat Germany’s aggression in 1914 so swiftly.

Although Alan is referred to above as Captain Haig-Brown, the London Gazette confirmed last week the rank of temporary Major. He is to be second in command of the 23rd (Service) Battalion, The Middlesex Regiment (2nd Footballers).

Alan is well qualified for this regiment, having won a footballing Blue at Cambridge in 1898 and 1899 and played seven games as an amateur for the Southern League side, Tottenham Hotspur in 1901-3.

We have noted an Admiralty despatch of March 25th regarding an encounter during a blizzard in the North Sea between a division of German destroyers and some of our light cruisers. During this engagement HMS Cleopatra (on which Commodore Reginald Tyrwhitt flies his pennant) rammed and sank one of the enemy destroyers.

“The snow hid the ships from each other until they were at close range. The Cleopatra recognised an enemy at once and rushed headlong at her, pouring in at the same time a staggering fire. The enemy was absolutely paralysed by the swiftness of the rush and the deadly character of the gunnery.

The Cleopatra was moving at great speed and, light as she is, her sharp bows drove deeply into the hull of the enemy, hurling the destroyer ahead of her.

Listing heavily, with the sea pouring into her shattered hull, the stricken enemy fell away from the bows of the cruiser and the blinding snow came down and hid her from view, as the cruiser plunged on in the darkness.

There was a rush to the place where the destroyer was last seen, but the storm held and the snow descended steadily, and when the spot where the destroyer had been was located, there was nothing on the wind-driven surface of the sea but some debris and a film of oil.”

As the term ends and our children disperse for the holidays, there are always a few points of interest to record for the school magazine, which Mr Vassall is busy preparing:

In common with the rest of Oxford, it has been necessary to modify the lights in rooms and corridors. It is one of the minor troubles of the war and it has given us occasional visits from courteous special constables. One was taken to an upper dorm to find a solitary candle on the floor, but the reflection from the white ceiling made the light visible from a considerable distance.

We have had curious weather this term, ranging from extreme mildness at the beginning of February to an extraordinary fall of snow and a most fearful blizzard right at the end of March. In the teeth of it Mrs Marshall (my daughter, Kit) crossed the Channel from Havre to Southampton for a fortnight’s ‘leave.’

We have been lucky this term in getting nothing worse than chicken-pox! Almost all the boys have gone up in weight since the end of last term.

We had a whole school holiday for Mr Watson’s wedding and the boarders went off in a motor-bus to the common between Long Hanborough and Witney, the Ford taking a full load of ladies and lunch – we cooked and ate sausages etc. and then basked in the sunshine.

Several bike expeditions with the Ford to convey lunch and girls have taken place. The woods at Beckley, the ‘Rock of Gibraltar’ and Shillingford have been the scenes of merry picnic parties.

The senior boys enjoyed a talk on ‘Soldiers’ Songs’ by GK Chesterton.

Mr Chesterton, who lives in Beaconsfield,  is famously both tall and of considerable girth.   A lady in London is reputed to have asked him why he was not “out at the Front” to which he replied, “If you go round to the side, you will see that I am.”

Jean Clunet, who was here as a boy in 1887/88, is now a surgeon in the French Army. He is a man of many adventures. He was in the thick of the fighting in Morocco in 1912; at the battle of Charleroi; in the battle of the Marne; won the Croix de Guerre for gallantry in the Rheims-Soissons sector; was ten months on the Gallipoli peninsula; obtained a few weeks’ leave and was returning to Salonika when his ship, the Provence II, was torpedoed by a submarine. He was one of the survivors and is now ready for further adventures.

Old Boys have won this term two DSOs, four MCs, one Legion of Honour, one Croix de Guerre and seventeen ‘Mentions in Despatches.’

The Summer Term will commence on May 3rd 1916