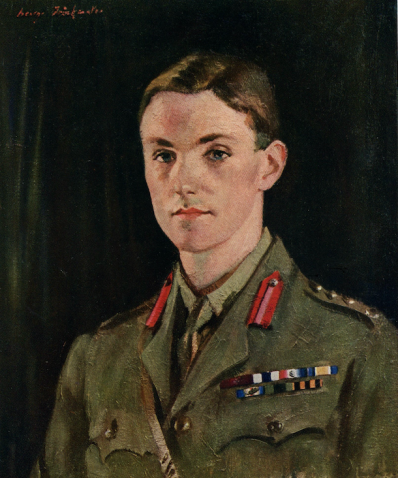 The past term’s edition of ‘The Draconian’ (due to be published shortly) includes this colour picture of a painting of Jack Smyth, the work of Old Dragon George Drinkwater, and done specially for our magazine.

George was at the OPS from 1889-94 and went on to Rugby School and then Wadham College, Oxford. When his friend from OPS days, Eric Macfadyen, enlisted as a trooper at the Queen’s Own Oxfordshire Hussars’ headquarters in New Inn Hall Street, he went off and did likewise. They were joined by four other Wadham men and a further two from other colleges and together formed half a troop in the 2nd Service Squadron (the 1st, formed the previous vacation, included OD Maurice Church, who was destined to become a war casualty).

After the Boer War George returned to his studies and the river: he was a noted rower, being in the Oxford eight in the University Boat Races of 1902 and 1903. Since 1906 he has been the rowing correspondent for the ‘Daily Telegraph’.

In the Great War, George gained a commission in the Royal Artillery and went with his battery to France. He was promoted to Staff Captain in 1916 and was then sent to Egypt and Palestine, where his services were recognised by his retention as Brigade Major for a year after the Armistice. He was twice mentioned in dispatches and was awarded the Military Cross in 1918.

In civilian life he has followed the architectural profession of his father, Harry Drinkwater, and has also met with success as a portrait painter, having a picture hung in the Royal Academy in 1913.

We were delighted to see George back for last year’s reunion dinner and he is seen here alongside his old schoolboy chum, Frank Sidgwick: 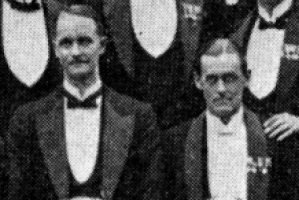