Notes for the Term

With the term now over, the next edition of the ‘Draconian’ magazine is being prepared.  Under this heading are included a number of points of interest that have emerged during the term:

I have received from West Coker Rectory a number of essays written by the children attending the Church School. They show that essay writing is carefully taught; and though in originality of treatment and in expression they naturally fall short of our boys and girls of the same age, I must say that, in writing and spelling, on the average they beat us. I am much pleased to see how good they are.

The competitors for Mr. Fitch’s Speech Prize were A Carling, P Mallalieu, Betjemann, Chadwick, B Burton. Carling received 10 votes and Mallalieu and Betjemann 2 each.

The boys subscribed £20 to help the Barnado Home and £5 for the crippled children’s ward at the Headington Orthopaedic Hospital.

Garner (Lynam)’s valuable 15 inch brass cartridge case from the Hohenzollern Redoubt has been hung up as a school gong. It awaits an inscription.

During the past term, Dr FG Hobson, working under Professor G Dreyer of the Department of Pathology, has made observations upon a number of boys in the school. These observations have consisted of measurement of standing height, sitting height and chest circumference, and in addition the weight and lung capacity of each boy has been taken.

The observations were taken at the beginning and end of term and it is hoped to follow the same boys through succeeding terms.

The work is being done under the auspices of the Medical Research Committee and forms part of a general investigation, which is now proceeding, upon the questions of Standards of Physique and Physical Fitness. When sufficiently extensive observations have been made, a report will be sent in giving the results of the enquiry as far as it may be of interest and value to the school.

As Hum (Lynam) reports below, we have had a reasonably healthy term, and have taken measures to combat any influenza:

“Acting on the advice of the local doctors, we had all but half a dozen of the boarders inoculated (by two injections at an interval of a week) against Influenza. There was no case of indisposition resulting from the inoculation, and we hope it may be as successful here as at a friendly rival establishment where, they assure us, they have never had a cold since it was done, eight months ago.

During the last three weeks of term we had a few cases of ‘impetigo contagiosa’ – better known as scrum-pox; and also of chicken pox. The latter seems hardly worthy of the name of disease, and is usually much less serious than a severe cold.” 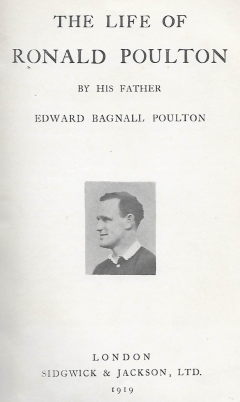 The revival of the Varsity Rugger Match, on 9th December 1919, saw the publication of ‘The Life of Ronald Poulton.’ The book is the loving and devoted work of his father.

To all people he was known as a great football player, perhaps the finest, certainly the most electrifying, three-quarter of any age…

But, as the pages of his life make clear to those who did not know, football occupied a very small part of his time and thoughts.  He regarded it as a great and glorious pastime, and nothing more. He could never regard it as an occupation worthy of a man’s whole devotion. Even on the night before an international match he would be more interested in wandering about the worst slums of Notting Dale than of thinking of what lay before him on the morrow…

It was too much to hope that the war would spare him. He went to France counting the cost, knowing that he had little chance of returning. He loved life, and hated the whole ghastly business of war, but he felt that it was his duty to go, that England might be somehow a better place for those who came after. And then – a stray bullet – and all was over.

Ronald Poulton went out to fight, to make England a better place. Will it be? It will be either better or much worse; if worse, then all the sacrifice will have been in vain…

What he would have done had he lived it is impossible to say… Though his views were still unsettled, they were taking shape. He was gravely dissatisfied with the relations of Capital and Labour; he was aghast at the social conditions of our big cities, horrified by the misery, crime, disease, waste. What an ugly contrast it all made with the New Jerusalem, with its happiness and spacious buildings and shining streets!

He would not have rested without trying with all his strength to do something, and others would have followed him…

It is because he had this rare and splendid gift for loving and for inspiring love, this magnetic influence and power of attraction, that his death has been no ordinary calamity.

But at least we can thank God that he lived and that he was what he was, bringing joy and sunshine and happiness to all who knew him. And if we keep his memory before us, as this book will help us to do, we shall be able to do our work with a stouter heart and a deeper vision, and to face the future with a brighter hope.

We have received news of the death of Maharaj Kumar Shivaji Rao (Shivajirao Gaekwad) who attended the school before the War.

Shivaji Rao, as we then knew him, was the son of Sir Sayajirao Gaekwad III, Maharaja of Baroda in India since 1863. 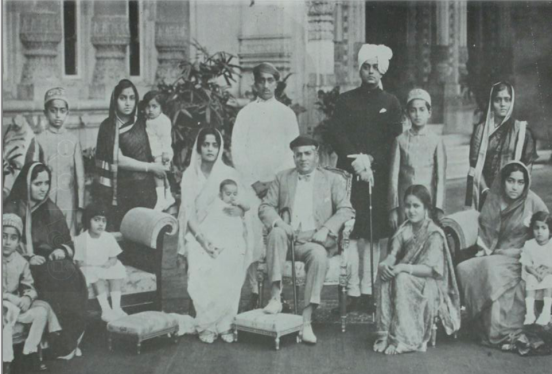 The Maharaja of Baroda and his family

The Maharaja came to England in 1900, bringing with him a party of 27 (seven family members and a staff of 20, including a secretary, two tutors, companions, maids, valets and a cook).

Shivaji first appeared at the OPS in the Summer Term of 1900, as was recorded in the ‘Draconian’:

“Also we have had this term two of the sons of perhaps our best friend and ally amongst the native princes of India, the Maharaja of Baroda, who is at present an honoured guest in England. His boys, Jey Singh Rao and Shivaji Rao have made themselves quite at home with our English boys and are deservedly quite popular – and should become good cricketers.”

Shivaji returned to the OPS for the Summer Term of 1902, when we saw more of his cricketing ability. He was awarded a cricket bat for an innings of 94 against Cot Hill School. Mr Vassall’s comment on him at the end of term was most complimentary: “A good bat; clever catch at the wicket; played one magnificent innings and never failed in an emergency.”

Indeed he became a cricketer of note, playing first-class games – the first of which was for the Hindus against the Parsees at Bombay Gymkana in 1909; in 1910 he played for the Gentlemen of England v Oxford University.

Wisden’s Cricketers’ Annual 1913 recorded that “Early in the season the Gaekwad of Baroda batted in such good style that he seemed almost certain of a ‘blue,’ but a serious accident – sustained away from the field – cut short his cricket.” It transpired that, after the University match against the Australians, he had become involved in a ‘rag’ in which he suffered a serious head injury. It was said that the ‘rag’ invaded the privacy of the dons and whilst the others managed to escape, he was left to face the consequences. He was ‘sent down’ and thereafter returned to Baroda.

The Maharajah, currently on another trip to this country, received the news of his son’s death by way of a cable on November 25th. It is understood that Shivaji died on pneumonia in Baroda on November 20th, aged 29. He leaves a wife and three children.