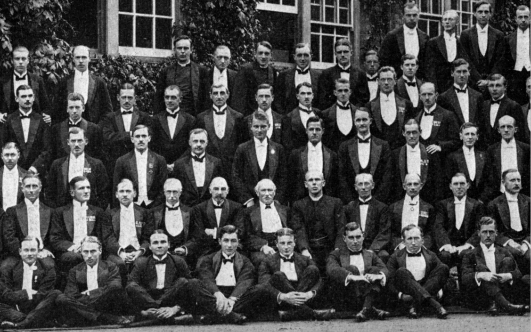 The Old Dragons have had their say on our reunion, now it is my turn!

It was the greatest pleasure to meet 115 of my Old Boys and the staff at dinner in the School Hall on Saturday. I am rather proud of having only in one case made a mistake in identification. If I failed to have a yarn with each individual it was for lack of time and not for lack of will. It was strange and delightful to feel that I am the one link between them all – that in the whole wide world there is no-one else who has known them all personally from their boyhood.

Walter Moberly (left) was one of our most distinguished Old Boys in the War, being twice mentioned in dispatches and winning the D.S.O in an action that sadly cost the lives of two other Old Dragons, Will Scott and Gifford Turrell. He has now returned to Lincoln College, where he is a Fellow, lecturing in philosophy.  Frank Sidgwick (right) continues to prosper with his publishing company Sidgwick & Jackson, having had particular success with the works of the war poet, Rupert Brooke.

Geoffrey Freyberg (left), having survived the battle at Jutland and witnessed the surrender of the German High Seas fleet in November 1918 on HMS Valiant, is now the King’s Harbour Master at Plymouth.  Geoffrey Rose (right) is in the process of writing up the history of the 2/4th Oxfordshire & Buckinghamshire Light Infantry in the War, to be published later this year. Having been called to the Bar in 1912, he is returning to a legal career.

Philip Frere (left) provided the ‘Draconian’ with an account of the retreat enforced by the Germans’ Spring Offensive of March 1918 and Nevil Norway (right) having as a 17-year-old witnessed the events in Dublin of Easter 1917, served the final months of the War as a private soldier in the Suffolk Regiment.  He is now up at Balliol College, reading Engineering Science.

Maurice Campbell (left)  ended the war with typhus and malaria and was invalided home. Last year he was awarded the OBE for his services with a field ambulance and has now returned to Guy’s Hospital as a medical registrar. Pat Campbell (right) having gone straight into the Army from Winchester in 1917, has now returned to Oxford to study for a degree at Brasenose College.

Roger Mott, it may be recalled wrote to us back in 1915 of his “Balkan Find” – a memorial tablet from the time of the Emperor Hadrian, and I understand that it is now the proud possession of the new Imperial War Museum, officially opened on June 9th by King George V at the Crystal Palace.

Geoffrey Carpenter spent the War with the Uganda Medical Service and wrote to us following the Battle of Tanga, known as the Battle of the Bees. He has now returned to Oxford and is working as a Specialist Officer for the control of sleeping sickness in Uganda. He is bringing out a book later this year, ‘A Naturalist on Lake Victoria, with an account of Sleeping Sickness and the Tse-Tse Fly’, about his time there (1911-14), the introduction written by his friend an mentor Prof. EB Poulton (father of Ronnie Poulton).

Sydney Carline, whose experience of being shot down over the Somme in 1916 was reported to us by his brother George,  enjoyed the final months of the conflict as a war artist. Having returned from his tour of the Middle East for the Imperial War Museum with his brother Richard last year, they have both enjoyed a successful exhibition of their work in the Goupil Gallery in March.

Jack Gamlen was one of the most prolific of our ‘war correspondents.’ A regular guest critic of our school plays before the War, he was particularly missed here when we were putting on ‘A Midsummer Night’s Dream’ in 1915 and he sent the boys a most witty verse.  We were delighted to have him back to review last term’s production of ‘Henry V’, even if his judgments were not always generous!

Noel Sergent, who sent us many descriptions of his time on the Gallipoli peninsula, together with a graphic account as to how he managed to escape drowning when his ship was torpedoed, we are delighted now to have on our staff, teaching French (of course) and mathematics. He is also a great asset on the river where he has been coaching diving.

Jack Smyth – whose array of medals impressed us all – was a regular correspondent in the War years. Who will ever forget the day to returned to the School with his VC? He has a busy time ahead – he is due to receive the MC on July 20th and be married on July 22nd,  but has kindly agreed to attend our Prizegiving on the 21st to give away the prizes!

There were many who were under Mr Clarke, my predecessor, and who had suffered from my mistakes and inexperience as a young teacher; and perhaps that meeting with an early generation of Dragons was of the greatest interest to me. They have had time to distinguish themselves, and many have done so…

And then, alas! there are so many whom we shall not see again at these gatherings, those who have so nobly given their lives for us.

(Of those mentioned above, a number had lost an Old Dragon brother in the War: Frank Sidgwick (Hugh), Geoffrey Freyberg (Lance), Maurice & Pat Campbell (Percy), for whom the day must have brought on very mixed emotions). 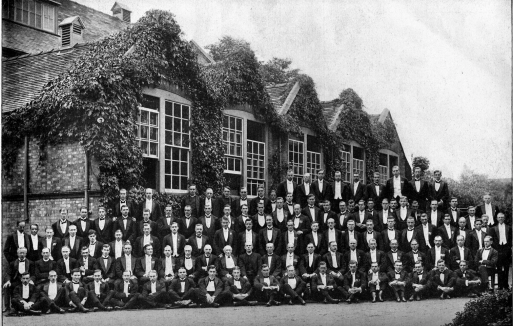 On Saturday, it was a great pleasure to be able to welcome back to the School a great gathering of Old Dragons. I am delighted to say that the events of the day have been recorded by one of our company,  who prefers to remain anonymous!

It was a magnificent gathering of 116 or 160, or perhaps 1,600 Old Boys, including representatives of all the First Families such as Tyrwhitt, Townsend, Johnson, Holland, Mayhew, Taylor, Spurling etc. – even men who were boys before the Skipper knew the difference between a centreboard and a centrebit, or between Capri and Chianti. ‘Fancy that!’ as Ibsen’s characters always remark when a divorce or murder in the family is announced.

Orders and decorations were worn, mostly on the left pap, where the heart doth hop; but some Old Boys preferred to tie them round their necks. These, we noted, were chiefly those who had lived in India and other light-fingered countries, so no doubt the precaution was instinctive. Be that as it may, the room glowed and gleamed with polychromatic ribbon and tinkling symbols of valour and prowess.

The menu was well chosen, the courses numerous and costly, the liquor generous, and the conversation consequently consecutive, but not subsequently inconsequent.

After the loyal toast, and the reading by the Skipper of the School’s Roll of Honour, he was again on his feet to give the health of his Old Boys in one of those magnificent characteristic speeches where spasmodic recollection of disjointed portions of the prepared speech (when the note happens to be decipherable) is periodically annihilated by a spontaneous heart-felt outpouring of the Skipper’s own colloquial, breezy, generous speech. He threw in, of course, as an afterthought, the usual time-worn plea that he should not be referred to in subsequent speeches…

But what, may we ask, is Home without a Mother? What Hamlet without the Prince of Denmark? ‘Quelle idee!’ as a naval officer sitting near me remarked under his breath, when he heard this request enunciated by the man he had come  – we had all come – to see and hear and talk about.

Walter Moberly was in very good form, and having said a few nice things about the School, turned frankly to the subject closest to our hearts and spoke at length and in detail about the Skipper, whose health really got drunk at the end instead of the School’s. The general opinion was that the School was quite able to look after its own health…

It was a great occasion, medicine for the spirit of the middle-aged pessimist and a vast stimulus to the wiser optimist. It is good to come home and find a welcome there, and go away humbled with the lesson that even the worst of us must have been good once.”