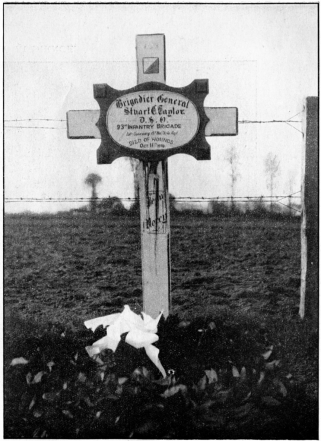 Two years ago today – just a month before the Great War came to an end – we lost our beloved Fluff Taylor, who died from the wounds he received from an exploding shell ten days previously.

We are delighted to have received this photograph of his grave at La Kreule Military Cemetery in Hazebrouck, south-west of Ypres. He was one of 78 generals to have died as the result of enemy action in the War.

Before his promotion to command the 93rd Division, Fluff had been Commanding Officer of the 15th Battalion of the West Yorks (known as the Leeds Pals) and was much loved, as this letter from one of his men testifies:

“The loss of our dearly loved and much respected Brigadier General has come as a great blow, and I am only one out of many hundreds who are so upset with this sad affair.

I was servant to the Brigadier when he was Colonel in the Leeds Pals, and he always loved us boys and saw to everything we desired; respected by every man in the Battalion, he was known as a thorough gentleman soldier, and, like the boys of 1916 whom he lamented, he died well, I’m sure. It gave me a shock when the news came, and I couldn’t have felt it more if it had been my own father, as indeed he was like a father to me all the time I was in France.

I was wounded in the retirement in March, and the Brigadier wrote at once to my mother, whom he frequently wrote to, and told her not to be alarmed…”

It was Fluff who first suggested, back in 1917, the idea of a war memorial and opened our fund with a very generous donation of £50. We look forward next month to welcoming the Bishop of Oxford to preside over a service of dedication of the Memorial Cross, being constructed at the bottom of our field on the banks of the River Cherwell.