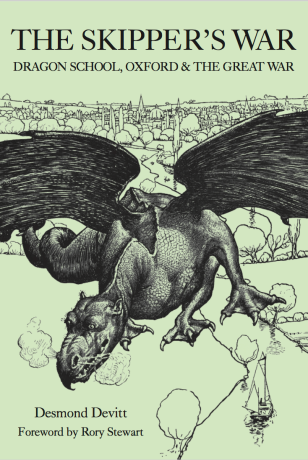 This 300 page hardback book, which is published by Scala, covers the years 1877-1920 and tells the story of the emergence of a small school in North Oxford under a charismatic headmaster and the remarkable generation that experienced the First World War.

The foreword has been specially written by Old Dragon, Rory Stewart, who observes,

“The story of these hundreds of lives and deaths connected by five years in a north Oxford prep school is almost an encyclopaedia of the war. The Dragons evacuate from the beaches of Gallipoli, are killed at the third Battle of Ypres, meet Lawrence of Arabia and Marie Curie, grapple with the German High Seas Fleet in the Battle of Jutland, save the wounded at the Easter Rising and are shot out of the sky by Baron von Richthofen…”

The book includes over 150 images, some never published before (including one of a young John Betjeman at the Lynam holiday home in Cornwall).

This is a private publication and, thanks to a couple of generous sponsors, can be offered at £25 (+ £3.50 p&p to UK addresses). It will not be more widely available until next year and this is an opportunity to buy the book for those who have already discovered and even enjoyed the blog (which has now had over 22,500 ‘visitors’ making over 45,000 ‘views’).

To place an order, please complete and submit this form:

Following receipt of this form you will be contacted with details regarding payment & despatch/collection.

“… An almost unbearably moving chronicle of the young lives –  ‘among the brightest and most talented of their generation’ – that were lost in the Great War. A valuable record of that wretched conflict, observed through their vivid, even, at times, humorous eyes. An affectionate portrait of the near-legendary headmaster who taught them the values for which they fought and sacrificed themselves…”       Nicholas Shakespeare

“… Imbued with the school tradition of summer holiday diaries, former pupils even sent their war diaries to the Skipper for publication in ‘The Draconian’, which means eye-witness glimpses of Mons, Ypres and the Somme – squashed frogs underfoot in the trenches, the stench of dead cows and sheep, the ‘delirious shrieks of those half-gassed’…

The contrast between Lynam’s loving, humanist hopes for his pupils and the nihilism of the Somme is deeply moving…“     William Fiennes

Readers of the book are invited to submit their reactions (6 lines max). Anyone wishing to contribute should complete the form at the bottom of this page.

“I have now finished reading ‘The Skipper’s War’, an experience I found by turns inspiring, interesting, funny and harrowing. I think its greatest achievement was to blend seamlessly together the disparate strands of narrative: the history of the war; the stories of the old boys; and the continuing life of the school. A remarkable achievement!”  Hugh Clifton

“I cannot commend this book enough. At first glance it might be thought that it would only appeal to readers with a Dragon connection. However, anyone with even just the slightest interest in the Great War will be mesmerised by the deft way Desmond Devitt interlinks the personal accounts of the combatants with the unfolding events of the 1914-18 conflict, while the heartfelt words of Skipper concerning the fortunes of his former charges provide an added poignancy.”  Stephen Dismorr

“I have received “Skipper’s War” and have not put it down – very interesting but sad. It certainly puts Covid into perspective.” Bill Bolsover CBE

“I am left with the words of Ronald Poulton ‘Of course it’s alright; but it’s not what one would have chosen’. How this sums up the attitudes of that age… We seem to have Iost so many of the characteristics of the war-time generations – fortitude, stoicism, patience, forgiveness and an appreciation of the many good things in life. If only today’s educators were like the Skipper. How enlightened he was, and how so many could benefit from his sense of adventure and contempt for petty convention.” Tom Bulford

“This beautifully prepared and researched book sets out the life and times of Old Dragons who died for their country and the Dragon School during the Great War.  The Headmaster, the great Skipper Lynam, loved them all and held each in his memory – as we can now, thanks to Desmond Devitt’s lovely book.” David Poole

“The book looks, and is, awesome. It is moving, interesting and informative in equal measure. A must for fellow Old Dragons, historians and those with an interest in the social and conflict history of WWI.” Stuart Moss

“For anyone interested in education this testament to the vision of the founders, teachers and pupils of the Dragon School, Oxford will be an education in itself. The stories, wonderfully told here, illustrate the enduring worth of the values woven into the fabric of the everyday life, in and out of the classroom, of a generation who gave so much.” Danny Gill