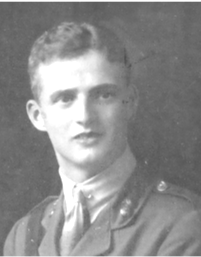 In the Times yesterday was the announcement of George’s death – the third Old Dragon to have been killed on August 16th (along with Alan Cam and Hampy Jefferson).

The family have been advised that George, who had been declared missing has in fact been killed and his CO has informed them that “the enemy put down a very heavy artillery and machine-gun barrage, and he was killed while leading his platoon up to support the troops in front.”

In May 1917 George was commended for his gallantry in a raid when he had a narrow escape. He performed a heroic action in carrying a wounded man for 300 yards over No Man’s Land. For this he received the honour of a ‘parchment’ – a thing peculiar to the Irish Brigade.

George was only with us for a year (1911-12), but his cheery nature and merry smile that was never missing from his handsome face, won the affection of all of us.

When George first tried to enlist last year, he was declared unfit for service due to “defective vision.” He successfully appealed against this decision, this process costing his mother a princely 4 guineas.

In just one cruel week, Mrs Falkiner has now lost two sons: in addition to the loss of George, her older son Frederick (who did not come to the OPS), was killed in action with the RFC five days later, on August 21st.