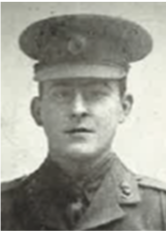 The current battle in Flanders has claimed a second victim from our ranks. Alan Cam – or rather Tom, as he has always been known to us – has been killed in the battle for Langemarck.

Tom has been in the thick of the fighting in recent months, being attached to the 36th (Ulster) Division. He went through the battle of Messines, being wounded for the first time just before the attack, but refused to report lest he should miss it.

He was wounded a second time on August 14th before being killed two days later. The notice of his death in today’s edition of The Times quotes Tom’s CO as saying Tom was killed “by machine-gun fire whilst leading his section to the site of the work they were to do. The fire was very heavy indeed there and by getting up to lead and encourage the men he met his death.”

His corporal kindly recovered Tom’s revolver and wrist watch and returned them to his father accompanied by a letter. A previous CO, Major Boyle wrote that Tom was “so full of life and fun and always wanted to do the daring jobs… It is always boys like this that are caught.”

Fortune does not always favour the brave.