February 4th 1919 – Admiral Tyrwhitt joins us in a school photograph.

As we come to the end of term, we can look back on the pleasure of meeting up again in peacetime with many of our Old Boys. We were particularly honoured by the visit of Rear-Admiral Reginald Tyrwhitt (who took the surrender of the German submarines).

It has been an especial pleasure to receive visits from those Old Dragons who contributed letters and articles to the Draconian during the war years. What a rich tapestry they have woven for us:

Roger Mott (writing of his archeological find),  Robin Laffan (on the difficulty of being understood by the Serbs), Walter Moberly (who wrote so movingly on the death of Hugh Sidgwick), Leslie Grundy (one of the first British soldiers to enter Lille last year), Maurice Jacks (who used Shakespeare to defeat the censor), Treffry Thompson (dealing with shirkers on a medical board at Cowley), Jack Gamlen (critic at our Shakespeare plays), Donald Hardman (recent winner of the DFC), Pat Campbell (on his experiences at Ypres), Donald Innes (who gave us the Despatch Riders’ Prayer), Pat Duff (who wrote about the evacuation of the Gallipoli peninsula), Tyrrell Brooks (who was so supportive of ‘Thomas Atkins’), and Geoffrey Rose (who recorded the battle in which Walter Moberly won his DSO).

How glad we were to see them all back at their old school after such years!

Many have told me that their deepest impression is the revelation of the supreme worth of a British Tommy. This seems to have formed a bond between classes which must in the end wipe out many class distinctions.

Yesterday’s edition of the Times listed numerous flying honours being conferred by the King. From this we have learnt that the Distinguished Flying Cross (DFC) has been awarded to Lieut. Donald Hardman (RAF).

Donald joined 19th Squadron at Baillieu, flying a Sopwith Dolphin, just in time for the German Spring Offensive of last year. In the final eight months of the war, Donald shot down nine enemy aircraft, which makes him the second OPS flying ‘ace’ – the other being Capt. Jim MacLean (RAF).

Two of Donald’s total were achieved on the flight for which he was cited for the DFC:

“A bold and courageous officer who has shown most praiseworthy devotion to duty, both in the March retreat and during the more recent operations. On 30th October, while escorting a bombing raid, he, with his flight, encountered some 40 enemy machines. In the combat that ensued he shot down two, and it was mainly due to his cool judgment and skill in leading that the flight inflicted heavy casualties on the enemy, destroying five machines and driving down another out of control. In all, this officer has seven hostile aircraft to his credit – destroyed or driven down out of control.”

Donald left the OPS in 1913 to attend Malvern College, at which he spent only three years before leaving to join the Artists’ Rifles in 1916. He transferred to the RFC in early 1917, but his young age prevented him being posted to France until the following year.

At the time of the Armistice, Donald was taken ill with flying sickness and was admitted into hospital in Boulogne before being transferred to a London hospital to complete his recovery.

We hope to see him back at the School before too long, fit and well.

Today’s Daily Telegraph, I note, records on their Roll of Honour, the death of 2nd Lieut. Wallace Hardman, alongside five others from the Manchester Regiment. From articles over the past week it has become clear that he was killed in the engagement that took place on January 9th at Mahammed Abdul Hassan, north of Kut.

The Hardman and Mallalieu cousins are bearing up well in the face of the news, as we settle into a new term – the eighth of the war thus far.

Young Percival Mallalieu (aged 8 and in Form 1a), remembers being with his Aunt Minnie (Wallace’s mother) last autumn on a walk that took them past her local Post Office, when someone came out with a telegram. She must have feared the worst, but as it transpired it was only to give her the news that Laurie (her third son) had arrived safely back at Bedford School.

“Auntie Minnie held the message so that we could see it; but her hand was shaking so much that we could not read it.” Percival recalled.

The telegram she so feared at that moment was the one she received a week ago, on January 13th: 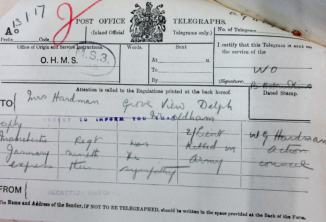 I am very grateful to the Hardman family for this most charming picture of their grandmother with ten of her grandchildren, taken in 1902. Three of them have now given their lives and four others are serving officers. 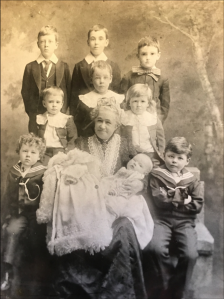 The older boys in the back row are David Westcott Brown (killed), Maurice Campbell (Lieut., RAMC) and Percy Campbell (killed).

With their grandmother in the front row are Donald Hardman (Artists Rifles for RFC) and Wallace Hardman (killed).

How can anyone look at such a picture without shedding a tear?