Following the news of the surrender of more German U-boats, we were honoured to receive a letter from Rear-Admiral Sir Reginald Tyrwhitt KCB DSO RN. It gave me great pleasure this morning to read it to the boys:

It will, I feel sure, be of interest to the School to know that the 5th Group of German submarines arrived yesterday, making the total number surrendered 114. There are a few more to follow.

I think that I, being an Old Boy, have the right to demand a whole holiday honour of the occasion. It would give me great pleasure if you could see your way to granting the school this favour and hope it will give them some pleasure too.

In reply, I have suggested that we should supplement our annual whole holiday on VC Day by an annual Navy Day on the anniversary of the Battle of Jutland, May 31st 1916 – a victory which shut up the German fleet useless in harbours for the rest of the war. 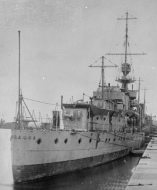 The Admiral has also sent us his account of the surrender of the first group of U-boats on November 20th:

“It was a most impressive sight to me, this long line of over five miles of German submarines steaming peacefully along, and one could scarcely realise that a short week ago, the slightest rumour of one such craft being in the neighbourhood was enough to bring our destroyers tearing up from all sides to hunt him to death…

The German captains were required to sign a paper on which certain conditions were laid down; the drift of these being that their boats were in good running order and ready for sea in all respects, also that no ‘booby traps’ or other such pleasant devices were arranged on board for our reception. Each boat now ran up the White Ensign, and with our prize crew in charge and the Germans fallen in on the foc’sle, proceeded into Harwich Harbour.

There was a certain amount of trouble over this latter condition; the German crews had been heavily bribed to induce them to come and had apparently not been told that they would be taken into a British port under our War Flag, as they call it.  It is a most interesting fact that the majority immediately concluded that they were about to be paraded through the streets of Harwich at the mercy of the inhabitants, after the manner of a sort of ancient Roman triumph.

One can easily imagine what would have been our fate if the conditions had been reversed.”