The paintings and drawings of Sydney and Richard Carline of Egypt, Palestine, Mesopotamia, Persia, India have been exhibited at the Goupil Gallery in London throughout February and March.

The brothers wrote a series of letters back from their travels, which stretched from January until October 1919, whilst in the employment of the Imperial War Museum as official war artists, and they have kindly allowed us to print them in this term’s edition of the ‘Draconian.’

Their first letter from “near Malta” was written on January 11th, describing their journey from Havre to Marseilles on a troop train. Letters followed form Port Said and Ramleh and then, on February 9th 1919, Sydney wrote from Jerusalem:

“Dick started a water colour here of the Mosque of Omar, the great mosque on the site of Solomon’s temple. 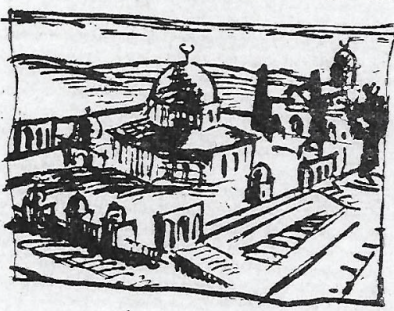 This is a sketch of his picture of the mosque. It is in blue and yellow tiles, making the sides of it a beautiful colour, and having a black dome. Around it is a white marble court, surrounded by grass and paths, and surrounding that again in the distance are the walls of Jerusalem going sheer down for 50 ft.

The space around the mosque is most impressive, especially as the city wall that encloses it here is built on the edge of a ravine some 200 feet deep, on the other side of which are the Mount of Olives, Gethsemane, and the village of Bethany. In this ravine are thousands of tombs covering it on either side, as the Jews believe that the Resurrection will take place in this spot and like to be close handy.”