Ronnie Poulton’s first spell in the trenches has ended.

It may seem strange to read of it so 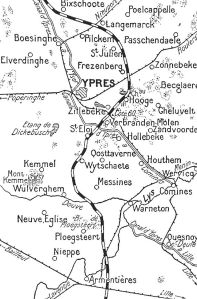 close to the enemy, but he has been playing rugger at Nieppe, near to where his battalion is at rest – a far cry from the new ground at Twickenham, which Ronnie graced when the first international was held there against Wales in 1910! (Even Twickenham – once a cabbage patch, incidentally – is part of the war effort, as I understand it is now being used for grazing for livestock).

Wednesday 14th April. “I played Rugger for the South Midland Division (48th) against the 4th Division. It was an amusing game; we had opposite us players like WJ Tyrell (Ireland), HJS Morton (Cambridge & England), JG Keppell (Ireland Trials), WP Hinton (Ireland) and were refereed by Basil Maclear (Ireland). I had a goodish side, chiefly 5th Gloucesters and we won 14-0, but they stuck it well considering their condition. Several of the Liverpool Scottish came over from Ypres, including ‘Dum’ Cunningham and Dick Lloyd. It was splendid to see so many Rugger players about.

I changed in the room of the Captain of the 4th Divisional Staff. They live in great style, quite unnecessarily so I thought. In fact they rather bored me. They ought to do a turn in the trenches with us all.”

How extraordinary that Ronnie, England’s captain last season, should meet up with Dick Lloyd, his opposing captain for Ireland!

Ronnie Poulton with Dick Lloyd. Captains of the England & Ireland teams of 1914, taken in March 1914

This cannot but bring back memories for many of us at the OPS of going to see Ronnie in the Varsity Match of 1909. GC Vassall (the editor of our school’s magazine) reported on the match:

“This year’s Inter-Varsity match will always be remembered as Poulton’s match. After much discussion and a vast amount of ‘newspaper’ criticism (which means so little and produces so little effect, if ‘our special correspondents’ would only realise it), Poulton was given his Blue as a wing three-quarter and proceeded to silence his detractors by scoring 5 of the 9 tries in the record score which was piled up against the unhappy Cambridge team….

Most of Poulton’s fielding was well done; he kept his position splendidly; his trick of holding the ball with both hands at the full extremity of his reach, his swaying for the feint, his masked pace, and his swerve fascinated everybody, and with it all he was rarely tackled.”

What happy times and sweet memories. We fervently hope that Ronnie and all those who contested the match at Nieppe return to give us more pleasure, nay excitement, when the war is over.