The occasion of the investiture of Rear-Admiral Tyrwhitt on Monday with the Freedom of Oxford was quite splendid, amidst much cheering and singing of ‘For he’s a Jolly Good Fellow.’ The parchment he received was in a silver casket with the Oxford and the Tyrwhitt family coats of arms on it. It was most impressive!

Accepting his honour in the name of the Harwich force which he led so ably throughout the war, he recalled his early days on the upper river and when he rowed in a race from Godstow to Binsey in 1880, aged 10. Many was the time when he came to grief on the river and he was dried out outwardly and inwardly refreshed at the nearby Trout Inn.

Our young scribe, John Brunyate (aged 12), concludes his account of the three days of the Admiral’s stay in Oxford:

“On Tuesday, to our delight, he came up and was photographed with the whole school. He brought with him two of the original members of the school, his brother Beauchamp Tyrwhitt and Dr. FC Ford, and, after he had satisfied the many autograph hunters, he claimed a repetition of the extra half.

In the afternoon, Mr Vassall represented the school at the Sheldonian, and found himself supported by Walter Moberly, Jack Gamlen and other ODs.”

This event was staged to confer on the Admiral a Doctorate in Civil Law (DCL) and the Public Orator, Dr AD Godley, made the presentation address. As it was long – and in Latin – we shall not include it here. Suffice it to say, in essence it said exactly the same thing as the song that was sung at his investiture with the Freedom! 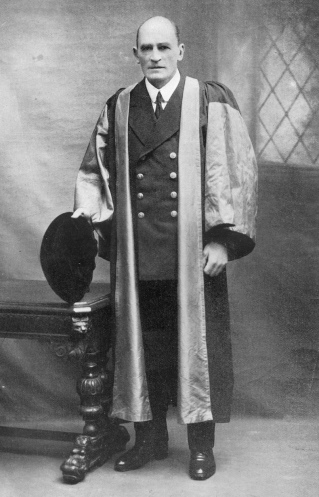