Our Old Dragons are doing us proud at present. The Times yesterday had a whole article on this well-earned promotion: 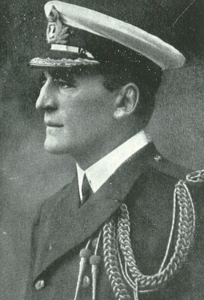 “It has been announced at the Admiralty that Commodore Sir Reginald Tyrwhitt KCB DSO ADC has been appointed an Acting Rear-Admiral, to date from January 8th.

At the beginning of the war Sir Reginald Tyrwhitt was serving as a Commodore of the Second Class in command of the destroyers of the First Fleet, with his broad pennant in the ‘Amethyst.’

He had previously come into public notice when, as a lieutenant, in March 1894, he had landed with a detachment of seamen and Marines from the ‘Cleopatra’ to protect the inhabitants of Bluefields, Nicaragua, during a revolution. The British landing party saved the town from pillage, and the lives of many of the civil population who were in danger. He was promoted to Captain in December 1913, when he was 43.

In the action in the Heligoland Bight on August 28th 1914, Sir Reginald commanded the Destroyer Flotilla, with his broad pennant in the ‘Arethusa,’ a newly-built ship which had not been 48 hours out of the dockyard before she was engaged with the enemy. The gallantry of the Commodore, with his skilful handling of the ship and the force under his command, were referred to in the despatches of the Rear-Admiral commanding the light cruisers and destroyers.

The ‘Arethusa’ had at one time all her guns, with the exception of a 6 in., temporarily disabled, and fire broke out on board. She was however, again brought into action, fought gloriously, and was of material assistance in the destruction of the German cruisers.

On many occasions since, Commodore Tyrwhitt has commanded a force of light cruisers and destroyers in action, including the air attack on Christmas Day 1914, the Dogger Bank Battle on January 24th 1915, and the engagements on May 10th and June 5th with German destroyers last year. In February 1916 the ‘Arethusa’ struck a mine and was wrecked on the East Coast.

During the four years he has been in command of the light forces based on Harwich, many Admiralty announcements have shown that he has continually exhibited dash, foresight and persistency as well as skilful seamanship and other qualities fitting him for high and independent command.”