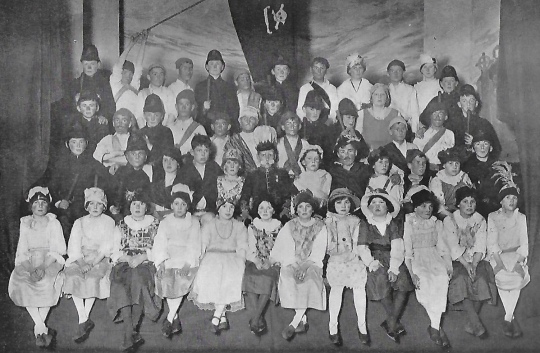 THE PIRATES OF PENZANCE

Due to disruptions caused by the ‘flu’, the play this term, which was Gilbert & Sullivan’s ‘The Pirates of Penzance,’ had to be delayed until the very last day of term.

Our reviewer was most generous in his remarks:

“Beginning with diffidence, they gathered confidence as they progressed and ended with ‘brio’ on a note of almost boisterous hilarity.”

A number were singled out for their performances, including Ruth (J. Betjemann):

“A pleasing buxom wench was Ruth, who scored a great success in the part of ‘Maid of all work.’ Always perfectly self-possessed, she enunciated her lines with a clearness which even in that company was remarkable.”

The holidays ahead – the first ones in which we can all enjoy peacetime pleasures since the summer of 1914 – we hope will be healthy ones too.

As Hum Lynam, writing in ‘House Notes’ for the ‘Draconian’ points out, we have been very lucky this term:

“The Armistice Term was also the ‘Flu’ Term and will be remembered as the first occasion on which the boarders have been sent home during term time. It was a preventative measure, which was fully justified by results, and we were heartily thankful that we were spared the anxieties and prolonged interruption of work, which were the lot of many schools. Except for a few mild cases of ‘flu’ just before we dispersed, we have been entirely free from illness.”