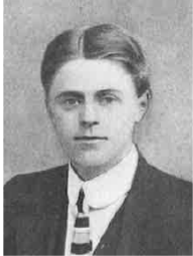 We have received news from Robert’s family that he died of the spotted fever at Iringa in Eastern Africa on September 9th.

In 1914, soon after arriving in Johannesburg, where he had gone to join the National Bank of South Africa, he was taken seriously ill, but recovered and with the opening of the East African campaign he passed riding and shooting tests and joined that fine body of men, Van de Venter’s Scouts.

In a short time 70% of them lost their lives and in 1917 Robert was drafted into the Military Labour Bureau.

He was a bright, merry, conscientious boy all the time he was with us; anxious to reach the high standard he had set himself both in and out of school.

I met him a few years later by chance in Stoke-on-Trent. He told me he meant to come and see his old school again after he had done something creditable.

His is the 51st name to be added to our Roll of Honour.