Much as one would like to have enjoyed the celebration of the school’s 40th anniversary this past week, all possible pleasure has been overwhelmed by the sadness we are all feeling at the loss of Hugh Sidgwick. I have no hesitation in saying that he was the ablest boy that ever came to the school, and withal one of the most lovable.

The circumstances of his death (which it pains me greatly to write about) are that on September 16th, Hugh was getting into a car to go to HQ when a German aeroplane dropped a bomb, wounding him and several others.

He was taken straight to the Casualty Clearing Station and underwent an operation. However, there was internal bleeding and he lost consciousness and died in the early hours of the 17th. We are reassured to hear that he was in no pain and slipped away quietly.

By the time his mother received this telegram notifying them that Hugh had been wounded, he was in fact already dead. 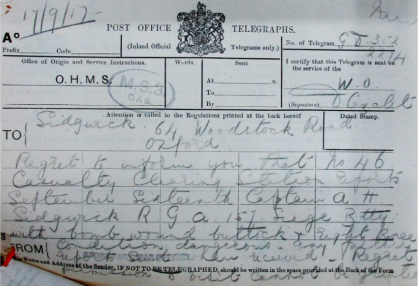 By the time they received a second telegram the following day telling them of his death, he had been buried in the Mendinghem British Cemetery.

All so quick. One moment he is the vibrant human being we have all loved so much, the next…  all this.