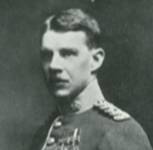 We have received the following account of events surrounding the death of Basil Parker at Krithia:

“Exactly at 4 p.m. Captain Parker, who was in command, called out, ‘Time’s up, my lads,’ and those in the first trench immediately leapt out, those in the second at once taking their places and leaping out a minute later, and those in the third line doing the same. All were well up in a good deal less than 5 minutes, and with a cheer they rushed forward.

It was a glorious charge and everyone showed splendid courage. The Turks were startled, and took a minute or two – not much more – to get their machine guns (of which they had one for about every 5 yards, and which during the bombardment they had hidden in the trenches) into position, so that our men got some way across the open space. Apparently, however, none reached the Turkish trench. All were mown down.

Of the second line, a few got across. Of the third line which had fewer men, more than half got through, and those who were left of the battalion held the trench until they were relieved by the Royal Scots and Royal Fusiliers. A private said positively that the Turks were driven from their front trench which remained in our hands, as perhaps did some others.

The open ground was so heavily swept by gun fire that it was impossible to bring in the wounded or the dead, even at night. Some may have crawled in, but the severely wounded must have died. As none could be recovered and identified, they were posted as missing. 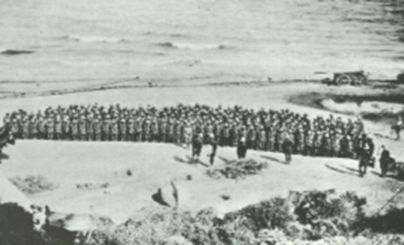 What was left of the 2nd Hants  being congratulated by the G.O.C. Division.