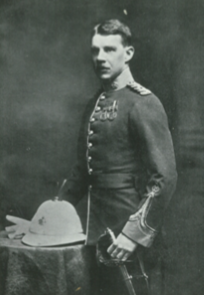 From Gallipoli comes the news (published in the Times yesterday) of the death of the 9th of our Old Boys to die in this War.

Basil left the OPS in 1889 and I remember him as a rather shy, diffident dayboy, who “found himself” later on. After attending Bedford Grammar School, on the outbreak of the Boer War, he joined the Imperial Yeomanry, Paget’s Horse, 52nd Company. Basil transferred to the Hampshires in 1901, receiving a commission.

Earlier this year the 2nd Hants. were sent out to Gallipoli, where he was wounded in May.  He made a swift recovery and returned to his unit.

In order to assist the opening up of a third bridgehead at Suvla Bay, north of the Anzac position, there were diversionary attacks both on the Anzac and Cape Helles fronts and Basil Parker was involved in the Charge of the 2nd Hants at Krithia on August 6th 1915.

“He was hit by a bullet in the left side; the bullet coming out near the left breast was deflected by his cigarette case and again entered the body and came out at his right side. He died four minutes afterwards with his head resting on the leg of a lieutenant. He was brought back to the dressing station and buried at 7.10 a.m. on the following morning about 50 yards behind the firing line.”