Following his rugger match for the South Midland Division against the 4th Division on April 14th, Ronnie Poulton has returned to a tour of duty in the trenches:

Sunday 18th April. “About midday was warned to go up to our new trenches, at present held by the 4th Oxfords,

as we were taking them over tomorrow. I was to go up to see round them. You can enter these by day, so I went up in the afternoon and got a guide from the Oxford headquarters. A short walk along the edge of the wood brought us to the communication trench, and so into the trench well to the right of our line. Moved down this and got to our trench. This is a top-hole one, strong in front, apparently good wire, good parados in parts, not bad dug-outs and apparently never shelled by the enemy…”

And may this continue to be the case! 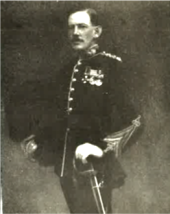 Having been ‘Mentioned in Despatches’  (17/2/15), Bartholomew Price has now been ‘Promoted for Service in the Field’ and is transferring to take command of the 7th Battalion Warwickshire Regiment.

Bartholomew joined the Royal Fusiliers in 1892 and served in the Boer War, taking part in the Relief of Mafeking. He was awarded the DSO in 1901.

Bartholomew joined the OPS in its second year (1878). He is the son of the late Professor Bartholomew Price, Master of Pembroke College, one of the group of Oxford Resident Fellows who founded our school.

Professor Price is remembered as a teacher of Lewis Carroll (CL Dodgson) when he was an undergraduate studying Mathematics at Christ Church.

Carroll referred to his teacher as ‘The Bat’ (‘Twinkle, twinkle Little Bat, How I wonder what you’re at’ as the Mad Hatter sang in ‘Alice’s Adventures in Wonderland’).