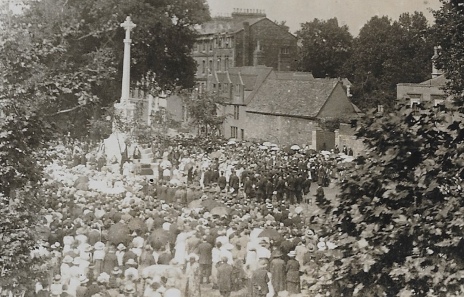 Yesterday saw the unveiling of Oxford’s War Memorial and its dedication by the Bishop of Oxford, Dr Burge, in remembrance of all the citizens of Oxford who gave their lives in the Great War.

It will be remembered that it was Dr Burge who performed the dedication of our own war memorial last year.

This new cross is situated at the north end of St Giles and very close to Balliol Hall (in the large building behind and to the right of the cross). It was here that the OPS, now Dragon School, started in two rooms with 14 boys under Mr AE Clarke in 1877.

Also yesterday, it is reported in ‘The Times’ that the Poet Laureate, Robert Bridges, was at Newbury Grammar School for the unveiling of their War Memorial.  His plea for the forgiveness of injustices should be noted. In his speech he said that there could not be proper peace and reconciliation in Europe until enemies expressed forgiveness.

On Tuesday 12th December, a concert was given by the Bach Choir in Queen’s Hall (the home of Sir Henry Wood’s Promenade concerts since 1895).  It was described in the newspaper as being “of very considerable and exceptional interest.”

The Daily Telegraph continued by saying that the novelty of the evening was “Sir Hubert Parry’s setting for five part chorus and orchestra of the Poet Laureate’s fine naval ode, ‘The Chivalry of the Sea.’

A work of no soaring ambition this; yet one characteristic of its composer in its dignity and the suggestion of depth underlying its reticent emotional appeal. There are contrasts in the musical mood in keeping with those embodied in the text, and from the sombre opening phrases, illustrating the line, ‘Over the warring waters, beneath the wandering skies,’ to the last, the spirit of the ode, dedicated to the memory of a young lieutenant of the RNVR, is faithfully reflected.”

The young lieutenant referred to, I am proud to say, is our own Charles Fisher, who went down on HMS Invincible at the Battle of Jutland, aged 38. (His brother is Dr HAL Fisher).

Robert Bridges begins his ode with the words, ‘Dedicated to the memory of Charles Fisher, late student of Christ Church, Oxford.’

You may have seen the Poet Laureate, Mr Robert Bridges has published a piece entitled ‘The Chivalry of the Sea‘ and the more observant amongst you may have noticed that this is dedicated to our own Charles Fisher, who went down with HMS Invincible at Jutland.

The well-known composer, Sir Hubert Parry, is setting the piece to music.

A friend of Charles Fisher’s, Mr George Lyttelton, has written a capital piece in Charles’ memory. Apparently Charles told him that all he wished to do after the war was to go to bed for five years, only getting up for meals – before adding that this was not to be considered incompatible with an earlier wish to end his days in a Worcestershire vicarage, having helped to settle the date of Deuteronomy.

How I do miss Charles.