News has reached us of Leslie’s death in Switzerland, aged 30, on July 14th.

During the war he served with the Hampshire Regiment, but in 1916 was attached to the Oxfordshire & Buckinghamshire Light Infantry. He was part of the army sent to relieve Kut which ended in failure. Leslie was wounded and was taken to recover in India, where he recovered but also caught malaria.

He stayed in the army through to October 1920, at which point he transferred as a Captain to the Territorial Reserves. Thereafter we rather lost touch with him. Given he died at Hotel Les Chamois in Leysin, a sanatorium, it seems likely he died of tuberculosis.

Leslie did not marry, but leaves a considerable family behind including his brother, Aubrey de Selincourt, who was shot down, we now know by German ace Werner Voss (his 31st victory), and spent the final year of the war in captivity. He is now teaching at Bembridge School on the Isle of Wight.

Before the war, their sister Dorothy married Mr A.A. Milne, an assistant editor of the ‘Punch’ magazine who had a novel (‘The Red House Mystery’) published earlier this year. They have a two-year old son, Christopher Robin Milne.

Following the news of the fall of Kut on April 29th we have now heard from 2nd Lieut. Leslie de Selincourt (who, you may recall, transferred from the 7th Hants to the OBLI), who has been wounded. He has written to us from the Club of Western India, Poona.

27/4/16 “I lent my valuable assistance during the battles of Feb 21st and March 8th, though unfortunately both turned out rather abject fiascos.

On the night of March 16th I was out in front of the parapet of the front line trench burying some bodies, which had lain there too long to make living next door to them enjoyable. The moon appeared from behind a cloud; an ill-mannered Turk saw me and hit me in the arm; annoyed because I didn’t drop down on my stomach and crawl home, he hit me again. Unfortunately in a more disabling place, the bullet entering my shoulder and reappearing out at the small of my back. I dropped like a stone and was unable to rise until three weeks later.

I experienced the usual sensation when hit – ‘never more pained or surprised in my life.’ Some ribs got cracked, but no vital part was touched and I have been the subject of congratulations from every doctor.

Now I am going up to Naini Tal – a very good spot in the Himalayas. Then I suppose I go back to the Gulf.”

Lieut. Leslie Murray (RNAS) was also involved in the efforts to relieve Kut and he too is now in hospital:

3/5/16 “I expect you will be sorry to hear I have arrived at the Funk Hole at Buzra, otherwise known as the British General Hospital. I had been feeling pretty rotten since last Thursday (April 27th) and on Friday I discovered I had a temp of 100.3 degree, so I retired to bed altogether. The heat in my tent was almost unbearable, the only breeze was a hot draught.

The next day I was just as bad, so, as our Naval Doctor has gone down with dysentery, I was sent along to one of the Field Hospitals close by. It was very hot there and the biting flies were most irritating, as I had not got the energy to drive them out of my mosquito net.

It was in the afternoon that I got the news of the fall of Kut, which was rather depressing, although most of us were fairly certain that they could not hold out much longer and it seemed fairly obvious that under the present conditions it would not be possible to get through, because we had a very difficult position to attack.

The Turks were very strongly entrenched at Sannaiat, and with marsh on one side and river on the other, it would have required a much larger division than we had got at the time, to get through.

Of course, several attacks were made on the position, but whenever they got through, they were driven back. We expected Kut to surrender any time, as we knew we could not feed them from the air much longer. Neither the machines or the pilots could stand it…

I suppose we prolonged the agony for four or five days… By the way, the things we usually dropped were ‘atta’ (a native flour), sugar and occasionally chocolate. I usually took 200 or 250 lbs and an observer; the food was placed inside two strong sacks, four 50 lbs sacks being placed on a specially devised bomb rack under the engine or between the floats, the fifth bag was put in the observer’s seat to balance the back of the machine and was heaved overboard by him.”

2nd Lieut. Leslie de Selincourt (OBLI) has reached Ali Garbi but floods, a shortage of mule rations and an uncertainty as to the friendliness of the Arabs in the area make for slow progress.

“There is a biggish Arab village 1½ miles downstream from which we bought eggs yesterday in large quantities. They charged a lot and they all turned out to be bad, so this morning we strapped on our revolvers, took half a dozen trusty followers with rifles and kit bags and marched straight into the village.

With the aid of an interpreter we interviewed the Sheik, explained our discovery about the eggs and demanded the right number in the right condition. It was about eight dozen. They hummed and hawed in excited tones and then some slunk away and after a considerable delay reappeared with two eggs. We explained that the compensation was inadequate. They merely looked stupid and pretended not to understand. So the word was given and we scattered through the village.

Time was called after sixteen minutes and the bag was as follows: 54 hens, 19 eggs, 2 leaded sticks, a Service Colt (loaded, ancient, but still serviceable), a cartridge belt containing 31 cartridges (also ancient) and a coffee pot. They came off very lightly, and as a hen in this country can be bought for four annas, we didn’t take enough to pay for our loss in eggs. But we didn’t want to make enemies of these people and if they don’t swindle us we are quite willing to trade fairly with them.”

So far Leslie and his troops have marched about 190 miles and they are now 42 miles from the firing line.

2nd Lieut. Leslie de Sélincourt has written to say that he has been transferred from the Hampshire Regiment in India to the 1st Battalion of the Ox & Bucks Light Infantry. 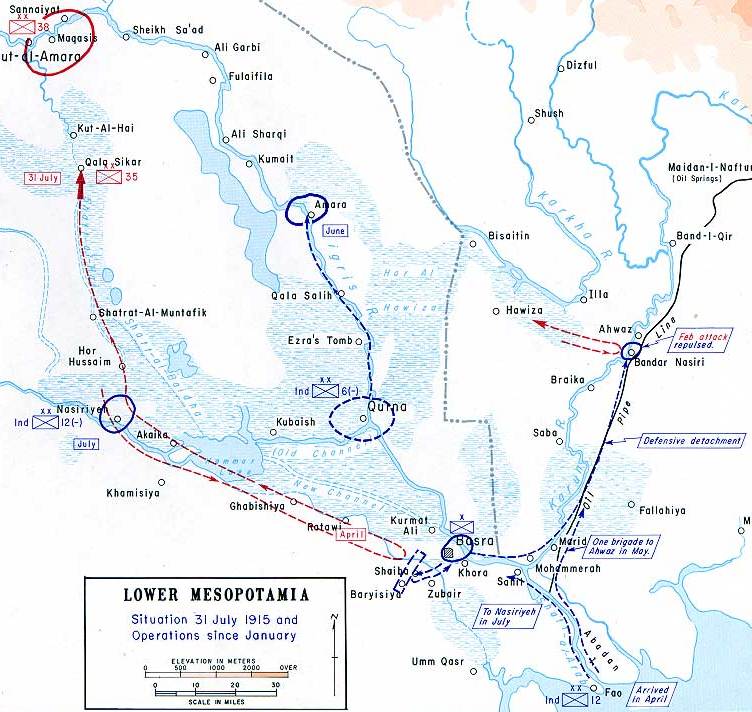