At the beginning of last term four most valued members of staff left us to join the armed forces. Mr Higginson, we note, has been promoted to Captain in the 6th Battalion of the King’s Shropshire Light Infantry and has been undergoing training at Aldershot and on Salisbury Plain.

Mr Watson left to join the Queen’s Own Dorset Yeomanry and was by chance in the vicinity of the attack launched by the Germans on the people of Norfolk last week.

“On the evening of Tuesday 19th January, some of the quiet villages and sea-board towns of Norfolk were roused by the purring drone of motor engines and the crashing of bombs from the sky woke them to the fact that the long-expected Zeppelins had arrived. Yarmouth was subjected to a feverish outpouring of these missiles which destroyed a considerable amount of property and killed two people, a man and a woman, both typical raid victims, poor, inoffensive and old.

The only disappointing feature from the German point of view was that the wild panic supposed to be engendered by these instruments of frightfulness took the form of an inquisitive crowd gazing sky-wards and a few family shot-guns fired into the air by irate old men long after the monsters had disappeared.

From Yarmouth the fleet spread itself over Norfolk, spitting bombs with reckless vehemence and doing the same amount of trivial and unnecessary damage wherever it went. One of the number passed quite close to Sandringham and dropped bombs at Derringham, three miles away from the King’s residence.

King’s Lynn was the object of a heavy bombardment and here whole streets of houses in the working-class and dock quarter were damaged, some of them reduced to ruins, but with the loss of only two lives, the victims being a boy of seventeen and the young widow of a soldier who lost his life at Mons. The raiders then drew off at about 11.15 p.m., having spent less than three hours over English soil and hurried back to spread the tidings of their magnificent exploits.

When one reflects that the total ‘bag’ consisted of four harmless non-militants and a certain amount of damage to private property, one cannot help thinking that the shortage of petrol in Germany is not so acute as some authorities would have us believe.”

These deaths are said to be the first ever suffered in this country due to aerial bombardment.

Henry Souttar (previously featured in this log on October 5th & October 19th) has had a book published in which he recounts his recent experiences. It is called ‘A Surgeon in Belgium’  and in it he tells of a quite astonishing incident concerning the Editor of an English Sporting Journal, who had joined the Belgian Army in the exciting role of machine-gunner in an armoured motor car.

On one occasion, having got out of his car to reconnoitre, some Germans in hiding opened fire and shot him, breaking the bones of both legs. He fell to the ground and an officer in the car by some mistake gave the order to start. But the Sporting Editor had no intention of being left behind. He seized one of the rear springs and held on, while his back and broken legs were bumped along the ground for half a mile at the rate of 25 miles per hour. He is now well and in England.

You may have read that the city of Antwerp surrendered on October 10th. The Germans gave notice that they were going to bombard the city on October 6th. The Belgian government left and general evacuation took place the following day.

It had been thought that the British Marines were coming to the rescue and  confidence had risen, particularly when on October 4th Winston Churchill, the First Lord of the Admiralty, was observed taking lunch in the Hotel St. Antoine. Henry Souttar commented:

“Surely nothing can inspire such confidence as the sight of an Englishman eating… and certainly on this occasion I found the sight more convincing than a political speech.”

Sadly, it turned out that this confidence was misplaced and the Marines were unable to get to them in time. We understand that Henry’s patients were evacuated by bus! They struggled to get everyone on the four buses provided. Nonetheless, they made their escape to Ghent,

“…utterly tired out, though personally I had slept a sort of nightmare sleep on the top of a bus which boldly announced its destination as Hendon.”

Henry is now in France. He has set up another Field Hospital, this time in Furnes, 15 miles east of Dunkirk. He has been visited by Nobel Prize winner Marie Curie, the discoverer of two elements (polonium and radium). 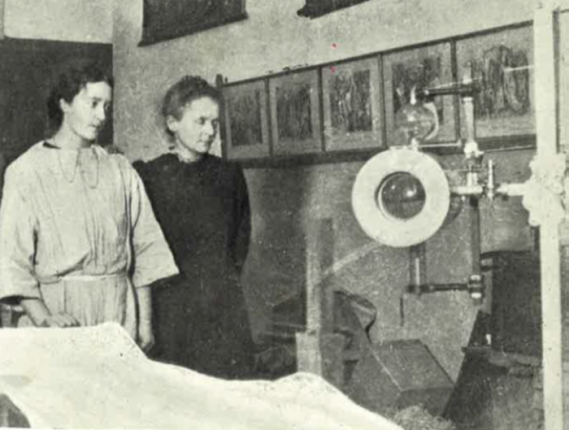 Mme Curie (right) with her daughter

“One of our most distinguished and most welcome visitors was Madame Curie, the discoverer of radium. She brought her large X-ray equipment to Furnes for work amongst the wounded, and we persuaded her to stay for a week.

One of our storerooms was rapidly fitted up as an impromptu radiographic department, the windows painted over and covered with thick paper, a stove introduced and a dark-room contrived with the aid of a cupboard and two curtains. Electric current was obtained from a dynamo bolted on to the step of a twenty-horse-power-car, and driven by a belt from the flywheel of the engine. The car stood in the courtyard and snorted away, whilst we worked in the storeroom alongside…

Madame Curie was an indefatigable worker, and in a very short time had taken radiographs of all the cases which we could place at her disposal…

Mademoiselle Curie developed the plates and produced photographs of the greatest utility to us.”

Marie Curie is determined to bring X-ray facilities to as many hospitals as possible. At her own expense she has converted a number of vans (nicknamed ‘Petites Curies’) and trained radiographers to operate them. Whilst not all hospitals have not taken advantage of her expertise,  Henry has welcomed her with open arms. 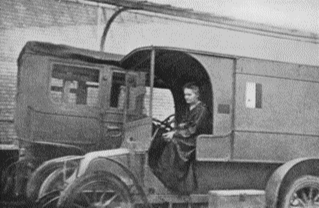 Now it is possible for surgeons to see more of the shrapnel, bullets and other materials that need removal in the operating theatre. Prior to this it was often necessary to open up a patient a number of times, when infections revealed the existence of further foreign bodies.

One of the first Old Dragons to cross over to Belgium was not in fact a soldier, but a surgeon: Henry Souttar. He has been appointed Surgeon-in-chief at a Belgian field hospital at Antwerp. Here he has had to deal with the casualties of war for the first time. Many have been wounded by shrapnel.

“The balls are small and round, and if they go straight through soft tissues they do not do much damage, If, however, they strike a bone, they are so soft that their shape becomes irregular, and the injury they can produce in their further course is almost without limit. On the whole, they do not as a rule produce great damage, for in many cases they are nearly spent when they reach their mark…”

Henry Souttar is also dealing with the problems of wounds caused by bullets, where infection has been a major problem for him and his team.

“…In most cases the wounds were anything but clean-cut; with very few exceptions, they were never surgically clean… When we say, then, that every wound with which we had to deal was infected with bacteria, it will be realised how different were the problems which we had to face compared with those of work at home…

Now there is one way in which all such infections may be defeated – by plenty of fresh air, or, better still, by oxygen. We had some very striking proofs of this, for in several cases the wounds were so horribly foul that it was impossible to tolerate their presence in the wards; and in these cases we made it a practice to put the patient in the open air, of course suitably protected, and to leave the wound exposed to the winds of heaven, with only a thin piece of gauze to protect it. The results were almost magical, for in two or three days the wounds lost their odour and began to look clean, whilst the patients lost all signs of the poisoning which had been so marked before.”

Bullet wounds are of course very common. Surprisingly, Henry does not appear always to be in favour of removing bullets from the body.

“If a bullet is doing any harm, pressing on some nerve, interfering with a joint, or in any way causing pain or inconvenience, by all means let it be removed…. But the mere presence of a bullet inside the body will of itself do no harm at all. The old idea that it will cause infection died long ago. It may have brought infection with it; but the removal of the bullet will not remove the infection, but rather in most cases make it fire up.

We now know that, provided they are clean, we can introduce steel plates, silver wires, silver nets, into the body without causing any trouble at all, and a bullet is no worse than any of these…. It may be a mark of a Scotch ancestry, but if I ever get a bullet in my own anatomy, I shall keep it.”

The greatest advance for the surgeon and of course the patients, compared with previous generations, is the availability of anaesthetics. Sometimes a soldier can be operated on whilst still conscious and yet feel no pain.

“With the injection of a minute quantity of fluid into the spine all sensation disappears up to the level of the arms, and, provided he cannot see what is going on, any operation below that level can be carried out without the patient knowing anything about it at all. It is rather uncanny at first to see a patient lying smoking a cigarette and reading the paper whilst on the other side of the screen a big operation is in progress.”

However, in many cases chloroform is needed for a general anaesthetic. This seems to suit the Belgians better than the British.

“The Belgians are an abstemious race, and they took it beautifully. I am afraid they were a striking contrast to their brothers on this side of the water. Chloroform does not mix well with alcohol in the human body, and the British working man is rather fond of demonstrating the fact.”