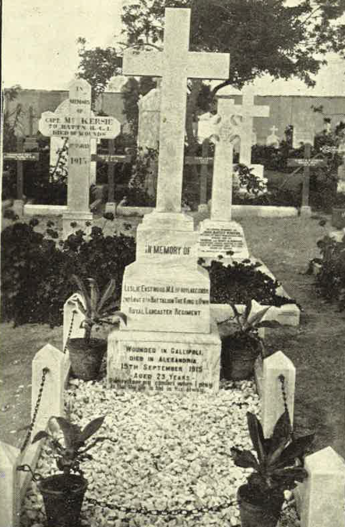 Today is the fourth anniversary of the death of Leslie Eastwood, who on the outbreak of war in 1914 left the OPS staff to join the army. It seems appropriate therefore to post this picture, sent to us earlier in the year, of his grave in Alexandria, where he died on September 19th 1915.

He had been wounded in Gallipoli and his letters indicated he was making a good recovery from what seemed to be relatively minor wounds. What we didn’t know was that he had been suffering from dysentery for quite some time.

It was a couple of days before the start of the school year in 1915 that the news of his death got to us.

We suffered a double blow, as the  day following Leslie’s death his friend and colleague, Higgy (Thomas Higginson), was also a  casualty of the war. We still miss them both and for many, like Kildare Dobbs, who wrote to us last year, the OPS has struggled to be the same without them.

The new school year, the first with my brother Hum at the helm, starts next week (September 23rd).