Yesterday morning (October 28th 1914) we were informed that Ruhleben was ready for us, and after much waiting about, and a short railway journey and two of the longest and weariest marches which we have made so far, arrived at 5 o’clock in the afternoon.”

After a three-week interlude at Plötzensee Prison, Cyril King has finally arrived at Ruhleben Camp, set up on a race course to house what was to be some 4-5000 mainly British civilians. He was destined to spend the rest of the war here.

“We sleep on our straw sacks, four on a bed board  and there is no room to put anything… The other occupants of the loft besides L., E., B., M. and Coote from Oxford (who were all at Baden-Baden) are chiefly merchant service officers and seamen and very cheerful and nice. Most of them come from Hamburg and they have great stories about the ‘hulks’ on which they were kept – some of them weeks – among rats and vermin with practically nothing to eat.

The camp consists of 11 long stone stables, fairly close together, a guard room and two other buildings, used by the Germans, three grand stands and a tea house, lying along one side of a race course. In each stable there are 26 horse boxes, about 7 or 8 feet square and containing six camp beds – two (one on top of the other) along each of three walls – and leaving about 4 x 5 feet of free floor space. The ‘lofts’ slope down to the windows and are never more than 8 or 10 feet high; they hold 3 rows of closely touching beds – one down each wall and one in the middle… 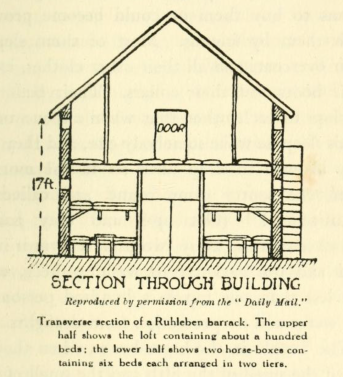 This picture is taken from ‘In Ruhleben, Letters From a Prisoner to his Mother,’ edited by Douglas Sladen in 1917, which shows something similar to what Cyril is describing.

I hear we are to be allowed to march round the racecourse for an hour every day for exercise. No newspapers are allowed except the ‘B.Z. am mittag,’ an afternoon paper which contains much less news than one edition of the ‘Star.’ The canteen is good though and one can buy most things, butter, roll, tea, biscuits, clothes, basins etc., though prices are very high, and I myself am very nearly ‘broke.'”