Over the past five years we have become used to hearing of the deaths of our old boys. Never, until now, have we lost a schoolboy. The news of the death of David Webb, who only left us last summer for Charterhouse, has cast a gloom over the school.

David was taken ill on February 11th with what seemed to be influenza and was taken to the School Sanatorium, where he was under the care of the School Medical Officer, Dr. CW Haig Brown (brother of an Old Dragon, the late Lieut.-Col. Alan Haig Brown). Within a few days it was clear that it was meningitis. The school employed Capt. Glover of the Lister Institute, but he was unable to save him.  David died in the School Sanatorium on February 22nd, aged 14 years. 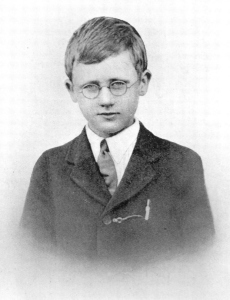 David had already won golden opinions at Charterhouse, and his House-master there wrote that he would have probably been head boy in due course. He had a strong as well as a most lovable character, and we looked forward to a distinguished and useful career for him – but it was not to be.

‘The Song of the Mermaid,’ by him in the August ‘Draconian,’ showed that he had admirable facility in writing English poetry, and his winning a scholarship at Charterhouse without anything like special preparation showed his intellectual promise.

These few lines from his ‘Song of the Mermaid’ are particularly poignant.

He also wrote a capital account of the visit to the OPS of Archbishop Cosmo Lang last summer.

The funeral will be at Godalming New Cemetery at 2.30pm on February 26th. (Train leaves Waterloo at 12.05) and the boys are collecting money for a wreath to be sent from all of us at the OPS.