Whilst boarders at the OPS come from all over the country, the dayboys of course live close by the school. An exception to this was Seyyid Ali, whose death (on December 20th) has been announced and whose family background was totally unlike that of any other of our old boys.

Seyyid Ali bin Hamud Al-Busaid (to give him his full name) was the son of the 7th Sultan of Zanzibar. In 1898-99 he came to Oxford to be tutored by Mr Farnell, Vice-Rector of Exeter College. During this time, as Seyyid Ali, he attended the OPS with the particular purpose that he should learn something of our Games. His contemporaries will remember his dashing runs as wing three-quarter for the School XV.

On leaving Oxford, he spent three years at Harrow School. 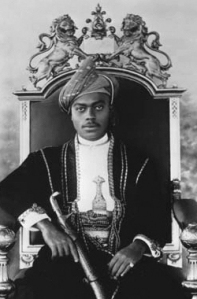 He became the 8th Sultan in 1902, but there was a regency until he came of age in 1905. His reign was a short one; ill health forced him to abdicate in 1911 and it is with sadness that we now hear of his death.

Zanzibar became a British Protectorate in 1890 (by the Heligoland-Zanzibar Treaty that gave the Germans Heligoland, which allowed them control of the Kiel Canal).

Zanzibar’s history thereafter has been strange to say the least. In 1896 the 5th Sultan died and a cousin of his seized the throne. Three days later, in a “war” that lasted some 38-45 minutes (surely the shortest war in history!) he was overthrown by the British and Seyyid Ali’s father was installed as the 7th Sultan.

The 7th Sultan was responsible for the abolition of slavery in Zanzibar, for which he was knighted by Queen Victoria, and this was the background to Seyyid Ali coming to England for his education.