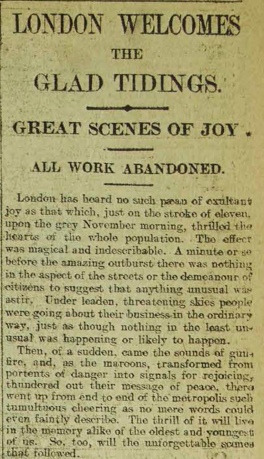 After four years of sacrifice, yesterday’s news of the Armistice is more than a little tinged with sadness at the thought of so many who have not lived to see this day.

As in London, the news of the Armistice was received with some enthusiasm in Oxford.

The first indication for many of us was the tolling of ‘Great Tom‘ in Wren’s Tom Tower at Christ Church (which, like Big Ben, has been silenced for the duration).

At 6pm the Mayor read out the terms of the Armistice in the city centre and the day concluded with fireworks and a bonfire (with the effigy of the Kaiser being consumed by the fire) outside St. John’s College in St. Giles, a stone’s throw from where the OPS started in 1877.

When the boarders return, we will have our own celebration.

Those noble sorts who have followed the King’s example – including Rear-Admiral Tyrwhitt –  in giving up alcohol till the war ended, can now enjoy their first drink since 1915!