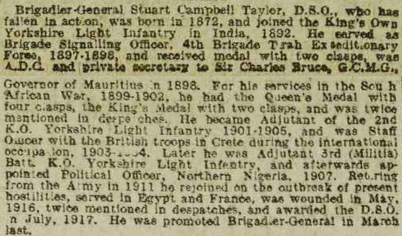 The death of Fluff Taylor strikes at the heart of the OPS family and both my brother Hum and I would like to record our thoughts and appreciation of his life as a pupil, colleague and friend.

Fluff, as a Dragon

I can see Fluff now with his reddish curly rough hair and his honest freckled face and bright dancing eyes, dressed in a sailor suit. I used to put him up on a desk in the old school at Crick Road and he sang ‘Kitty Wells’ and recited the ‘Wreck of the Hesperus’ most pathetically.

Then later he was our swimming instructor and started the tradition of fearless diving which has been maintained ever since. In those days the Lodge was a merry place and Fluff was the life of it. Then we heard of his exploits in the Himalayas when fighting fierce tribesmen; the Boer War (which claimed the life of his brother, Rex), Graspan and Magersfontein, then colonial work in Nigeria.

When the Great War came he rejoined the Army, was wounded, went back again and after winning many decorations was hit by shrapnel under his helmet on October 1st.

During all those years he constantly came back to his old school, always the same old Fluff. He chummed with different generations of boys, he got them countless ‘halves’ and ‘no preps’; he told them grand yarns, he pillow-fought in the dorms…  There was always a thrill of delight when GC (Mr Vassall) told us that Fluff was coming.

And always he took me with him to the beautiful cemetery at Holywell and laid wreaths of flowers on the graves of his father and brother; and then he would talk to me of higher things, of the mysteries of life here and hereafter – and lately he always came back in our talks to the absolutely magnificent behaviour of his men – their humour, their readiness to make the best of things and such awful things, their refusal to give in to hunger and sleeplessness and awful sounds and sights; he told me how anxious they were about his welfare and that of other officers.

‘Tommy,’ like the boys and myself, never had a dearer or truer or warmer-hearted friend. His resting place is at La Kreule, but his spirit is ever with us to inspire and to cheer and to love.

My brother, Hum Lynam has written:

“In Bedford and Sandhurst days his buoyant spirit, supported by a high reputation as a footballer, won him great influence in School and College. But he was no mere jolly athlete. He won a Scholarship at Bedford and the School Prize for Latin Verse. He quoted Latin in letters from India, with just enough degree of error to prove the genuineness of his knowledge. His descriptions of the antiquities of Crete, his poems, his plea for the serious study of French, showed clearly the instinct of a scholar…

He once wrote a letter to the Draconian to protest that ‘none of the boys (as shown in a photo of the School XI which he had recently received) appears to possess a brush and comb.’ The protest is characteristic. As a soldier he knew and taught the importance of attention to detail: and in one of the best sermons we ever heard – which Fluff preached on March 4th 1917 – he elaborated this point to the complete conviction of right roughest-haired Dragon in the room.”

As our friend, Archer Vassall, has observed,

“There is no Dragon out of the whole number serving who was more intimately bound to the School.”