With the new term starting on September 20th, we are now into the final week of the summer holiday.

No doubt we will all reassemble with many new stories to tell – in my case that of finding a new boat! 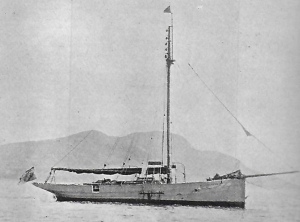 I spent six weeks on board the ‘Onnie’ in the summer, cruising up and down 17 miles of the Crouch estuary. The place has its charm, but one longed ‘to beat the open seas.’ The tide was very strong at Burnham, and it requires some care to navigate a big boat amongst the hundreds of vessels of all sorts that throng the narrow estuary.

We got on the mudbanks several times, had one capital sail carrying away the leach of the mainsail, had grand displays of search-lights, aeroplane machine-gun practice, anti-aircraft barrage, and once got overhauled by a Motor Launch for landing against regulations.

It was the first time since 1914 that I had been afloat and it made me long for more unrestricted sailing which Peace must eventually bring.