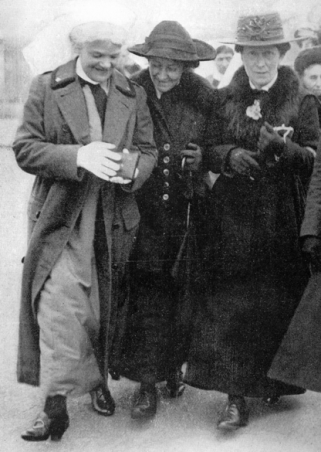 With the start of the Summer Term today, we can welcome the boys back with some jolly good news. Yesterday Sister Wilkinson had the honour of receiving The Royal Red Cross (2nd Class) from the King at an investiture held at Buckingham Palace. She was accompanied by Miss Bagguley and Miss Williams.

Nurse Wilkinson left the OPS for war work in October 1914 and was posted to the 3rd Southern Hospital in Oxford, working at Somerville College, which, being next door to the Radcliffe Infirmary, was taken over by the Army for the benefit of wounded officers.

In 1915 Nurse Wilkinson was promoted to Sister, but earlier this year she developed Cellulitis (blood poisoning) affecting her arm and thumb through dressing septic wounds. She has been forced to take time off from her duties and is now going to Cornwall, where we sincerely hope she makes a full recovery.

Last summer, she was tireless in her endeavours to get wounded officers in her care to take exercise on our fields, and she raised many cricket teams to come and play against our boys.