Lieut. Blake Budden (Middlesex), who has been in captivity since the beginning of the war, is now in Holland. It was announced in the newspapers early last month that he was one of the second batch of British prisoners of war to be transferred. He was given quite a reception! 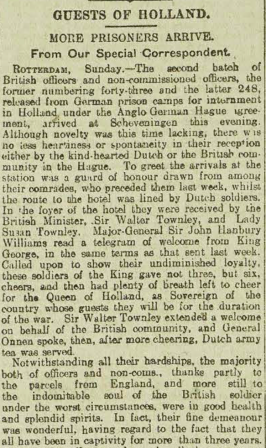 Blake was commissioned as a 2nd Lieutenant in 1910, after serving in the Officer Training Corps whilst he was at Repton School. At the outbreak of war, he was on an extended stay in Frankfurt and was taken prisoner there in August 1914.

Soon after his capture, his father wrote to the War Office to enquire whether there was any possibility of Blake being included in an exchange of British nationals, suggesting that his knowledge of languages would make him a useful officer if only he could be released. This was to no effect.

In June 1917 however, following talks at The Hague, it was agreed any officers who had spent 2½ years in captivity could spend the remainder of the war in neutral territory.

Blake’s new address is British Interned Prisoner of War, Hotel Royal, Scheveningen, Holland. We have had a letter from him, the contents of which I will share shortly.