The holidays are here and we have every reason to be thankful, that during a term in which there has been a great deal of illness at many Preparatory or Public Schools, we have had nothing worse than an epidemic of mild mumps. Otherwise we have been delightfully free even from colds and coughs. Several boys have suffered from bad chilblains.

We will remember this term particularly for the ice-skating. In the end, we had glorious skating for three weeks (Jan 27th – Feb 18th) on the University Skating Club flooded meadow. The authorities were good enough to admit us at half fees (3d a time) and, even so, got about £15 from the School!

Mr Haynes produced about 30 pairs of primeval skates that had been stowed away in the dim past, but before the skating was over many new ones had been purchased.

The morning was quite the best time to go and we took off one of the morning hours of work. Often the Caravan-Ambulance made three or four journeys with small boys and provisions for picnic lunch on the ice (once, when changing a wheel for a puncture, she went down gracefully on to her axle and was derelict for some hours). 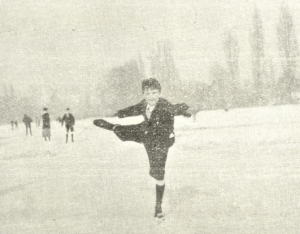 Many boys learnt to skate quite well – Dennis Buck (who, given the opportunity, will rival his brother Geoffrey some day) and Fred Huggins could cut all forward threes and do outside edge backwards. This is G.C’s description of their performances – G.C (Mr Vassall) also gave them handsome skating prizes as rewards for their efforts.

Miss Field’s collection of eggs for the wounded soldiers has been greatly appreciated at the hospitals. During this term 1,738 have been delivered, making a total of 3,531 since the start at Mr Fletcher’s instigation in October last.

Next term begins on Wednesday 2nd May.

Postscript. We have had word that Jack Haldane, who had recovered from his previous wound and gone out to Mesopotamia, to his intense chagrin, was wounded again the day before the fall of Kut. He was injured whilst trying to put out a fire in his camp, when a bomb exploded and wounded him in the leg.