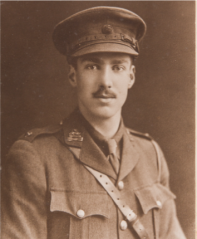 Another Old Dragon has joined our Roll of Honour. Nevile West has been killed. He had already had one lucky excape. You may recall that he sent us an account of his experiences in the Battle of Neuve Chapelle in March 1915.  He described how his camera was hit by a bullet that would otherwise have killed him.

Nevile’s bravery was recognised in the award of the MC ‘for conspicuous bravery‘ when he was twice wounded in an attack not long after the above incident.

It is understood that Nevile met his death on the night of January 16th when, in preparation for an attack, he and his company moved into position, where they experienced severe shelling. This bombardment claimed the lives of Nevile and one of his men, whilst five others were wounded.

Letters from fellow officers are always appreciated by family and friends alike, and it is inspiring to hear when one of our Old Boys is given such respect as Nevile was:

“His disposition was always bright and cheery, in fact he was the life of the mess, a good musician and a very fair artist, and up to the time of his death appeared to have led an almost charmed life, for he knew no fear or hesitation where duty called him and his one thought was the comfort and safety of his men.”

Nevile was somewhat reserved and diffident as a boy, as I recall, but had plenty of energy and ‘go’ and was much beloved by all who knew him at all intimately.