Our new Prime Minister, Mr Lloyd George has announced his new Government and amongst the new appointments is Dr HAL Fisher, as President of the Board of Education. 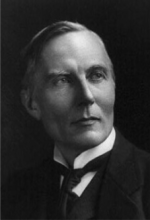 Although we cannot claim him as an Old Boy, four of his brothers were at the OPS.

Since 1913, Dr Fisher has been Vice-Chancellor of Sheffield University and his appointment to the Board of Education is unusual, in that Mr Lloyd George has appointed an expert in the field of education, rather than a politician. Perhaps he will now be found a seat in the Commons.

The Fisher family is well known in Oxford. Dr Fisher’s father, Mr Herbert Fisher, was a Christ Church man and became tutor to the future King Edward VII in 1859.

One of his daughters, Adeline, is married to the composer Ralph Vaughan Williams (who joined the RAMC as a Private in 1914).

Of his sons, Edmund Fisher has enjoyed success as an architect. At Somerville College both the Maitland Building (1910–11) and Hall (1912–13) are his work. He is currently training to be with the RFA, whilst his brother Edwin is serving with the Life Guards.

Lastly, Charles Fisher (who was Senior Censor at Christ Church) went down with HMS Invincible at Jutland and William, having been Captain of HMS St. Vincent at Jutland, has recently joined the Anti-Submarine Division at the Admiralty.