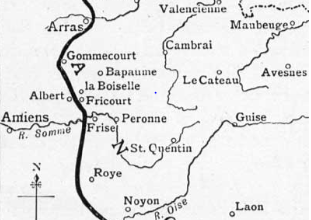 The Push has indeed started, but we have little news as yet.

The report (as it appeared in yesterday’s Daily Telegraph) was general in scope, but positive in tone. However, the German statement quoted on page 10 suggests that the Germans were well prepared for this and that we suffered “very heavy casualties.”

Today’s paper (page 9) does mention that the West Yorks Regiment were involved in an attack on Fricourt and that they “went across toppingly.” Whilst we know that its Commanding Officer, Lieut. Col. Stuart Taylor is not involved (he is recovering from wounds received earlier in May in Princess Alexandra’s Hospital for Officers in London), Capt. Jack Ruttledge is a West Yorks man and may well be in the thick of it.

Lieut. Robert Gibson, whose letter we received only a few days ago, may well now be in action, as the Bedfordshires are also mentioned as taking part in this offensive.

We most earnestly hope that our dear Old Boys all come though unscathed, but meanwhile their parents are condemned to live in continual fear of the post boy with a telegram for the duration of this great battle.

We must all be brave.