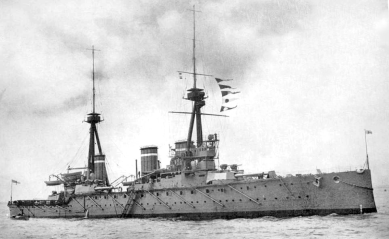 It transpires that there were only six survivors from HMS Invincible and it is by extraordinary luck that one of them, Commander Dannreuther, was at the side of Charles Fisher when the explosion occurred.

HMS Invincible was involved in a gun battle with the German battleship ‘Derfflinger’:

“We hit the Derfflinger with our first salvo and continued to hit her entirely owing to the perfect rate Charles gave us.

It was all over in a few minutes and death came suddenly and painlessly. Everything was going splendidly at the time, and it was entirely due to Charles’ cool head and excellent judgement that our firing was so effective.

I saw him only a few minutes before the end – a smile on his face and his eyes sparkling. He was by my side and in the highest spirits when there was a great explosion and shock, and when I recovered consciousness I found myself in the water.

Ship and crew had disappeared.”

Commander Dannreuther estimates that this great ship went to the bottom in a matter of only 15 seconds.