Whilst we are enjoying our holidays, it is good to learn that some of our troops are also enjoying a break from the war. The soldiers need to be entertained as well as rested and it takes an Old Dragon Royal Engineer with experience of life on the River Cherwell to organise something like this!

Aquatic ‘Spasms’ at the Front

“Yesterday we organised a Regatta, or rather some water-sports on the Canal basin, by the side of which our train is stabled. Everything passed off most successfully, and it was a very laughable affair as well as a big success. The greasy pole was however too easy, and the expert came too soon among the competitors and released the coop which held the duck, who fell into the water, where it was chased and captured by one of the competitors.

We wound up the programme with a surprise for the spectators. A mock telegram was read out as from the Kaiser saying he was sending a submarine to stop the sports. A submarine with U.29 painted on it was then pulled in by wires, and as a wind-up, we exploded a mine under it.

All events were held in the water; and the instability of the rafts (which were made of sleepers lashed to drums) was a source of constant amusement.

The very last item on the programme was the presentation of prizes, among them being a Challenge Shield made out of a German shell.” 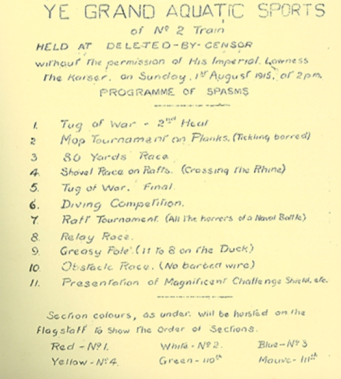