Whilst many Old Dragons have been enduring the terrors of the trench warfare in France and Belgium, Lieut. Pat Duff, serving with the RFA in the Gallipoli campaign, has found some time for recreation and the occasional acquisition of luxuries; but even then there are reminders that the war is not far away. 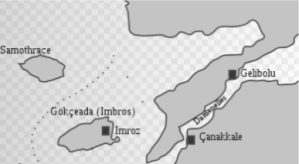 22/5/15 “I went and bathed on a beach facing Imbros and Samothrace, in beautiful clear water. On the cliff-edges were little wooden crosses signifying where men of the landing party had fallen at the first assault. It seems a funny thing to be bathing and enjoying oneself in the midst of all this, but one just takes things as they come and when one can enjoy oneself, one does.

27/5/15. I am with the Battery and living in the Eagle’s Nest, as we call it; incidentally not a bad name, as I saw a Sikh a bit further up the ravine feeding a young eagle, which he must have found here. The Sikhs are good to see in the mornings combing their long black hair; in this setting it puts one in mind of the Spartans before Thermopulae.

Had rather fun the other day; I had gone down to the beach and saw that the ship I came from Alexandria in was here. I managed to get on board and secure a bottle of fizz and a bottle of whisky.. Fizz was Heidsieck, and only 6/- a bottle because duty-free – you can have best brands of fizz at that price. Seemed funny to have it out here.

2/6/15. I had some plum pudding the other day which G’s people had sent; also the waiter at Buol’s had sent him a slab of turtle soup. This slab was watered down to make soup for all of us, and consequently tasted as if it was water that a turtle had had a bath in.

6/6/15. We have some long days now and again, getting up at 4 a.m. and going to bed about 1 a.m. occasionally; but sleeping practically out of doors makes what sleep one has go further…

The time one feels it most is about 2 p.m., when there is no shade of any kind; in the trenches the sun simply beats down on one and one’s clothes get full of sand; I got covered with sand and earth yesterday by a shell and it got all inside my riding breeches, annoying me very much.

The great comfort is having the sea so handy; by means of the communication trench we can go from the guns to the edge of a cliff and so down to the great and wide sea also without showing ourselves on the sky-line.”