Amongst all the depressing war news, there has been at least one cause for celebration. My daughter Kit is married. On February 27th we had a whole holiday in honour of her wedding. All who know him agree that Lieut. Marshall, the bridegroom, has only one fault – and that is that he is not an Old Dragon. A wedding under the auspices of about a hundred schoolboys, mostly armed with confetti and old shoes, is an ordeal severe enough in all conscience. But the bride and bridegroom took it all smilingly.

We are not quite sure how they actually took the incident on the first tee of the golf course at Frilford when their golf club bags discharged pounds of confetti in a strong wind, but can well believe that the bridegroom, at all events, was imperturbable. The boys subscribed for a very nice wedding present in the shape of a serviceable suitcase.

Kit was the first of a number of girls I have admitted to the OPS since 1898.

I have sometimes been, shall I say, criticised for admitting a few very select girls to the School. Personally I have no doubt whatever of the good effects it has on the boys, nor of the benefit that the girls themselves obtain. It is absurd to say that it makes the boys girlish or the girls boyish. The prejudice against the presence of girls at a preparatory school is merely a silly conventional attitude.

By the bye, I have never heard any objections to co-educating!

We have also noted with great pleasure the announcement of the engagement of Naomi Haldane, rising seventeen, to one of her brother Jack’s best friends, Dick Mitchison. They are not to marry until next year. In the meanwhile Lieut. Mitchison is at the Front.

Naomi, who has been such a prolific contributor to the pages of ‘The Draconian’ over the years,  has submitted a most touching poem for our next edition. 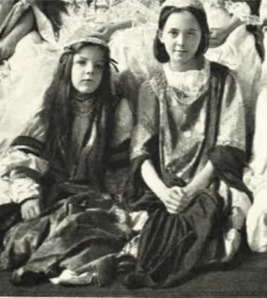