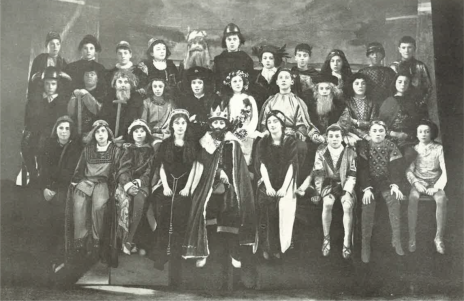 Having devoted three days to rehearsal, we put on three performances of ‘Hamlet’ over the first weekend of the new term. This was generally reviewed favourably.

From the Oxford Magazine:

“From the melancholy business of arranging half-hearted lectures for skeleton classes, some of us were glad enough to snatch a respite by withdrawing to the OPS in order to witness the performance of no less a play than Shakespeare’s ‘Hamlet’…

As regards diction there was universal excellence; and it is clear that the OPS may rightfully boast of being a school of pure English, where elocution does not rank among the forgotten arts, as happens too often nowadays.”

We were delighted that Rosina Filippi was able to attend our first performance. She is well known as the first dramatist to adapt the works of Jane Austen for the stage. She is also the author of  ‘Hints to Speakers and Players’ and readers my be interested in the first chapter on ‘Diction and Elocution.’ She was rather more critical of the children:

“I think too much was sacrificed to the careful enunciation of words. It was too syllabic. I don’t mean that the sense of the sentences was not there – in many cases it was amazingly clear. It showed great intelligence on the part of the boys that they could deliver lines so accurately as to convey the adult reading in their own delivery; but the poetry as verse was gone; the metre was lost, there was no footing in the line. It was an intelligent reading but not scholarly.”

Finally, this performance was also reviewed by the Oxford Times:

“The boys and girls of Mr. Lynam’s school gave three performances of Shakespeare’s ‘Hamlet.’ The first, on Friday evening was witnessed by nearly 400 boys and girls from the various Oxford elementary and higher grade schools, and with the unfortunate exception of a knot of boys in one corner of the gallery, they all appeared to appreciate and enjoy the performance. The boys referred to did not know how to behave, and to some extent spoiled the evening for the rest.

Hamlet’s part was taken by Terence Greenidge. The boy’s elocution was perfect, and he never hesitated in the enunciation of the seven or eight hundred lines he had to say. His rendering was different from that of the professional Hamlet; he was not so much the ‘melancholy Dane’ as the fiery youth who until the end of the player scene was not sure of the Ghost’s story, but afterwards was ready to carry out his murdered father’s command to avenge and at the same time spare as far as possible his weak mother.”